So much of comedy is context. Things are often especially funny when they are incongruous with the background. For example, the behavior of the Blues Brothers in a fancy restaurant is much funnier because their vulgarity is especially out of place in a formal setting.

But in many ways not just the setting but also the history and cultural background is needed to “get” a joke. For example, when Aristophanes makes a joke about Cleonymus throwing away his shield, we have to know that shield throwing is shorthand for cowardice, and that Cleonymus had a reputation along those lines. Not knowing who that person is or what it means to throw down a shield, such a joke just can’t land.

Or to get a joke about Hercules at the dinner table one must know that the demigod’s insatiable appetite was something of a cliché in Aristophanes’ time.

Obviously, these are not great examples. A modern person who has never held a sword may still understand the implications of throwing down one’s shield. And even if Hercules is not a regular character in our comedic repertoire these days, gluttony is still readily understandable. But I am at a disadvantage in picking my examples; the best of them go right over my own head.

As a result of this need for background information, much ancient (or otherwise culturally remote) comedy is quite inaccessible. Certain people, customs, or places that form the butt of jokes might not be known, so the joke must fall flat.

Aristophanes is often accessible. In The Clouds, for example, a lizard defecates onto Socrates’s face. Classic. However, at other times, I just feel like I am not in on the joke. He lampoons people that I’ve never heard of, and makes all manner of social comments that are simply beyond me. 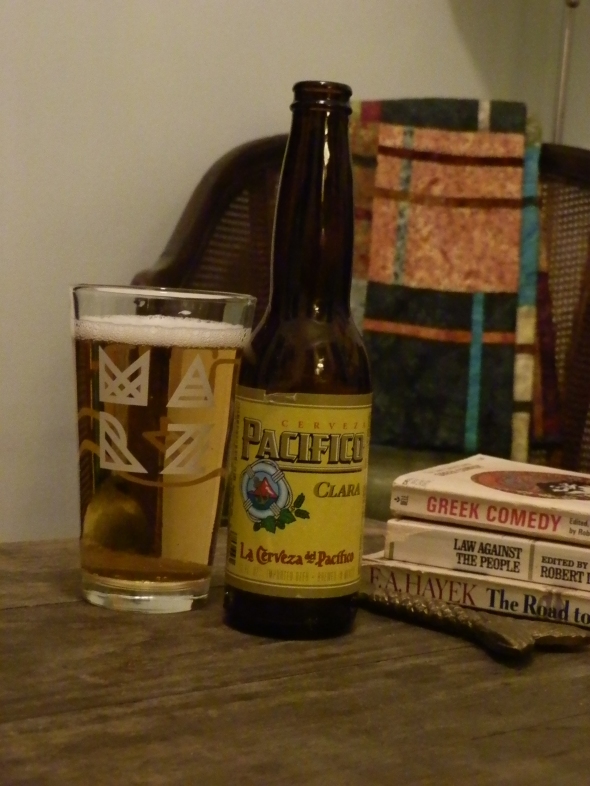 Beer of the week: Pacifico Clara – This is yet another bland Mexican lager. There is not much else to say about it. It is a little sweet and a lot bland. Pacifico is not bad, but there is just not much to it.

Reading for the week: The Wasps by Aristophanes, Lines 986-1121 – In this part of the play, Aristophanes (through the chorus) lets us know that there is much more at stake than getting his jokes. He believes that there are bigger, more important things going on in his satire than getting laughs.

Question for the week: What about comedy is truly universal?

When the weather turned cold on my last visit to the Czech Republic, I had many a glass of hot blackcurrant wine. But whether my winter warmer is mulled wine, hot rum, or high alcohol beer, I have a habit of thanking my drink with a line from Hamlet:

For this relief much thanks: ’tis bitter cold,
And I am sick at heart.

To be sure, I am rarely actually sick at heart, but I often feel more morose in the winter. Cold is more oppressive than heat, in my opinion. According to Dante’s Inferno, hell is icy cold at its core. The reason for this is simple: humans are creatures of heat. We would much rather live in a world of fire than in a world without fire.

Our bodies function best at temperatures in excess of 98 degrees although most of us live in ambient temperatures that are far lower. To some extent, we must bundle ourselves against the cold even on temperate days. Our evolutionary roots are embedded in equatorial Africa. We are drawn to the fire and turn our backs to the cold and the dark.

And to the extent that we are attracted to cold things, the attraction is usually with reference to heat. Downhill skiing is best when there is a roaring fire and a cocktail waiting for us après ski. An ice-cold beer is best on a hot summer day.

We are children of warmth. Bundle up and drink something with a little fire in it! 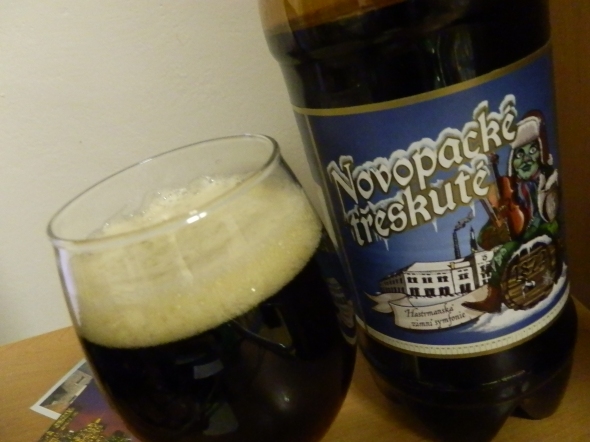 Beer of the week: Novopacké Třeskuté – Last week I admitted my ignorance of the Polish language. This week I admit my ignorance of Czech. I think that the name of this beer might be a pun. I looked up “třeskuté” and found that it means “bitter”. As in English, (I think,) this could refer to the taste of the beer or the severity of the winter cold. Another hint that the name is a pun is the fact that this dark winter lager is not actually very bitter tasting. It really tastes more like toasted crackers: somewhat sweet and somewhat burnt. At 6.3% alcohol, this is definitely a winter warmer, and I have only seen it in 1.5 liter bottles. If that much beer can’t warm you, no amount can.

Reading for the week: Hamlet by William Shakespeare, Act 1, Scene 1 – The tragedy of the melancholy Dane begins in the middle of a cold, dark night. This scene sets a tone for the entire drama.

Question for the week: What warms you?