“For my part, I travel not to go anywhere, but to go. I travel for travel’s sake. The great affair is to move; to feel the needs and hitches of our life more clearly; to come down off this feather-bed of civilization, and find the globe granite underfoot and strewn with cutting flints,” writes Robert Louis Stevenson in his Travels with a Donkey in the Cévennes.

Night is the best time to be in the forest or in the field, away from the city and its restless denizens. “Night is a dead monotonous period under a roof; but in the open world it passes lightly, with its stars and dews and perfumes, and the hours are marked by changes in the face of Nature… All night long [the man who sleeps afield] can hear Nature breathing deeply and freely; even as she takes her rest she turns and smiles.” With some cold beer and some fine weather, a man could do far worse than to spend a night far from the city. Which is why I am going camping this weekend.

Travels with a Donkey describes Stevenson’s 12-day hike across the mountains of central France. I will have to settle for a weekend at a state park, and a few hours of highway driving to get there and back. So what if Stevenson’s trip has the advantages of greater leisure and more picturesque environs? I have the edge in a very important respect; while his trip was made in solitude, mine will be in “solitude made perfect.”

Stevenson lamented, “even while I was exulting in my solitude I became aware of a strange lack. I wished a companion to lie near me in the starlight, silent and not moving, but ever within touch. For there is a fellowship more quiet even than solitude, and which, rightly understood, is solitude made perfect. And to live out of doors with the woman a man loves is of all lives the most complete and free.” 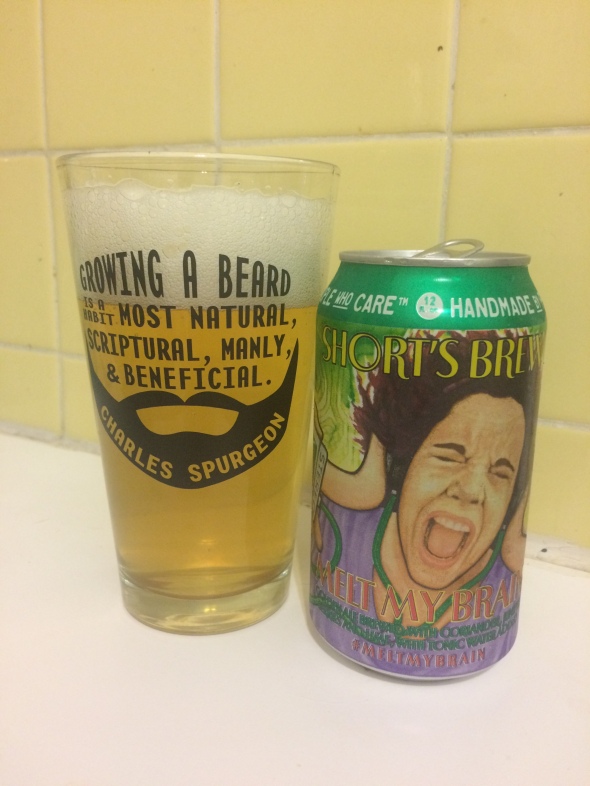 Beer of the week: Melt My Brain – This beer comes from Short’s Brewing Company in Michigan, and from the word “go”, it was sure to be unique. The can advertises a “golden ale brewed with coriander, juniper berries and lime, with tonic water added.” It is the lime and the tonic that predominate, at the expense of the beer itself. The beer pours a very pale and slightly hazy yellow. Lime leads the aroma. The first note on the tongue is sticky sweetness. The sweetness is cut as the flavor develops, first by the tart lime and then by the lingering bitterness of piney hops and quinine. I can’t help but think that the tonic water is a big mistake; it adds way too much sugar. And, although I appreciate the distinctive bitterness of the quinine, I suspect that lime zest and/or more hops could be employed to similar effect. Or they could add quinine rather than whole tonic. (By the way, if you think that a G&T is a low calorie alternative to other cocktails, think again; tonic water has nearly as much sugar as a regular soda pop.) I appreciate the innovation, but Melt My Brain just is not for me.

Reading of the week: Travels with a Donkey in the Cévennes by Robert Louis Stevenson – In this portion of the book, Stevenson describes a beautiful night spent sleeping in a pine forrest. His bespoke sleeping bag was made of “green waterproof cart cloth without and blue sheep’s fur within,” and he woke in the middle of the night to smoke a cigarette and study the color of the night sky. Almost makes me wish I smoked.

Question for the week: Does camping sharpen our appreciation for home, the way that Plato claimed we can only appreciate comfort by being relieved of some discomfort?

This is the twenty-eighth in a series on The Harvard Classics; the rest of the posts are available here. Volume XXVIII: Essays English and American

Spoiler Alert: If, by some miracle or defect in education, you know nothing about The Strange Case of Dr. Jekyll and Mr. Hyde, do not proceed. Rather, find a copy of that book, avoid reading the cover or any introductory material, and read it alone, preferably in one sitting.

I suspect that nobody will have cause to heed the above warning. Jekyll and Hyde are so engrained in our culture that one could hardly reach drinking age without knowing the gist of the story: mild-mannered Dr. Jekyll, by means of a chemical concoction, transforms himself into the evil Mr. Hyde. But what people often fail to realize if they only know about the the story secondhand is that the fact that Jekyll and Hyde are the same person is a shocking twist ending. Unlike in the adaptation The Nutty Professor, where we watch the scientist transform, in Jekyll and Hyde, the titular characters are introduced in a way that conceals their relationship. Throughout the story, the narrator slowly untangles the mysterious connection. The slow build and dramatic twist made the book immensely popular, and ironically, its popularity spoiled the story for many future readers.

With the common understanding of the plot comes a common misunderstanding: the idea that Jekyll and Hyde are two sides of the same coin, one good and one evil. Though Hyde is the evil side of Dr. Jekyll’s being, Dr. Jekyll is not merely the good side. He is the composite of Hyde and some unidentified good side. Jekyll and Hyde are not, as in common metaphor, opposites. Rather, Hyde is just an isolated part of Jekyll.

Jekyll’s own account of his transformation contributes to the confusion on this point. He refers to the struggle between “these polar twins”, the good and evil parts of his soul. But we never see Hyde’s twin. For some reason, Jekyll is able to unbind his evil side, but not his good side. How different a story it would be if Jekyll’s experiment transformed him into his angelic, pure good version rather than the demonic, evil Hyde.

To push even further from the notion of Hyde and Jekyll as opposites, the character of Jekyll suggests that he is more than a simple dichotomy. Despite his reference to “these polar twins”, Jekyll opines that “man will be ultimately known for a mere polity of multifarious, incongruous and independent denizens.” So at most, Hyde is likely just one facet of Dr. Jekyll’s immensely complex soul.

Stevenson, like Plato before him and Freud after, seems convinced that the human soul (psyche?) is either multipartite or, at least can be most readily understood by means of such a metaphor. It seems to me that the soul is too complex for such analysis. There is no “good side” and “evil side”; no desires or appetites that can be neatly and perfectly divorced from reason or affection. We are whole beings, not a mere assemblage is parts. We are all Jekyll and no Hyde. 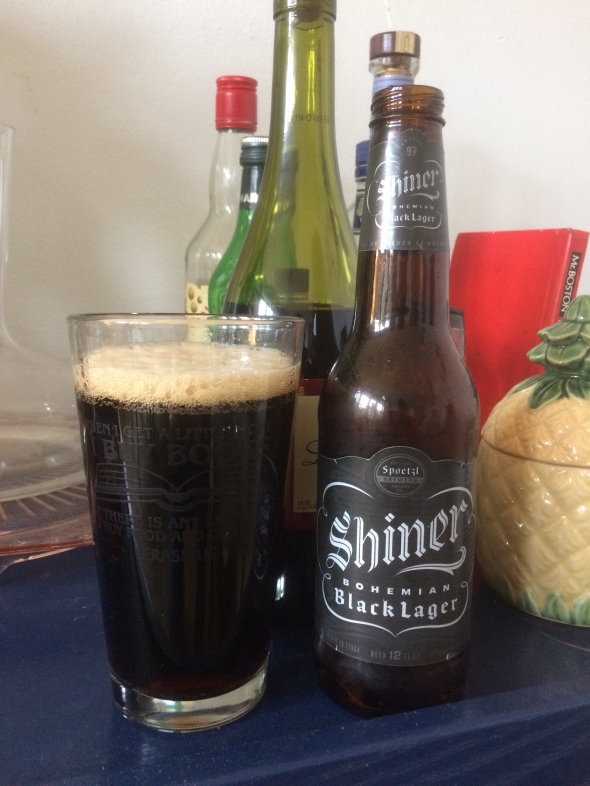 Beer of the week: Shiner Bohemian Black Lager – Calling Spoetzl Brewery’s Shiner Bohemian Black Lager the Hyde to Shiner Bock’s Jekyll would fly in the face of the analysis above. Yet here we are. This, Spoetzl’s schwarzbier, is a pretty nice offering. It is very dark brown, with a quickly diminishing tan head. The aroma is of dark malt. The flavor is is a bit smoky, but quite light and refreshing.

Reading of the week: Truth of Intercourse by Robert Louis Stevenson – As is evident in Dr. Jekyll and Mr. Hyde, Stevenson was very interested in how people represent themselves and their true natures. In this essay, he discusses the ways in which people can be habitual liars, but honest in their relationships, and vice versa. “Truth to facts is not always truth to sentiment;” he writes, “and part of the truth, as often happens in answer to a question, may be the foulest calumny.”

Question for the week: Do you perceive multiple parts of your own soul?

This is the eleventh in a series on Franklin’s moral improvement plan, the rest of the posts are available here.

CLEANLINESS: Tolerate no uncleanliness in body, cloaths, or habitation.
– Franklin

By Moscow, I did not smell very good. That fact is not surprising. After all, I’d been without a shower since Vladivostok, some 5,752 miles away. Hell, I’d been without warm water all that time. But the fact is, the trans-Siberian railway is primarily for people traveling only a fraction of the line. Doing the long-haul is not for those who are overly scrupulous about cleanliness.

Even on less extreme journeys, travel is usually dirty. This is especially true when it is done right. I don’t mind the tiny handprints on my khakis from the macaques or the rust stains on my jeans from my ill-conceived trip across the Hangang. A certain amount of mess shows that one has been doing something interesting.

Perhaps the unavoidable (and enjoyable) filth of travel is the best argument for maintaining a clean house and observing excellent personal grooming when at home. The true interest of travel is the experience of the new and the different. So for the proverbial dusty trail to be enjoyed properly, it must be made to stand in contrast to the dust-free homestead.

Beer of the week: Zombie Dust – Would that the dust in my house were all Zombie Dust! It took a trip across state lines, a wedding, a slumber party, and a very gracious friend for me to get my hands on this coveted pale ale from 3 Floyds. (There are certainly cleaner and easier ways to get my hands on this beer, but that’d be way less fun.) Zombie Dust pours with a frothy head, and smells strongly of tropical fruit. Mango, pineapple, and citrus assault the nose. The beer is quite hoppy, tingling from the time it touches the tip of the tongue until the bitterness catches just a bit in the back of the throat. But as it warms, caramel notes start to emerge and the yeasty sediment makes itself known. Truly, this is an excellent beer.

Reading of the week: Fellow-Passengers by Robert Louis Stevenson – The Scottish author wrote of paddling across Belgium in a canoe, rambling through the French mountains with a donkey, crossing the oceans by steamer, and ultimately settling in Samoa. This chapter is from his book Across the Plains, in which he details his train travels from New York to California. According to Stevenson, the trains crossing this continent smelled “of pure menagerie, only a little sourer, as from men instead of monkeys.”

Question for the week: Franklin’s advice is to “tolerate no uncleanliness”, but such a stark prohibition seems at odds with the moderation advocated in the rest of his moral precepts. How can we reconcile these ideas, especially given the fact that an obsession with cleanliness is manifestly harmful?