“I’ll get my homework done later, geez!”
“Don’t take the Lord’s name in vain, even euphemistically!”

I actually overheard an exchange substantially like that once. Until then, I could hardly have imagined a mother scolding her teen-aged child for such a thing. I had never even thought about the fact that “geez” is certainly a euphemism employed specifically to avoid saying “Jesus.” With a little thought, though, one could easily list quite a few very common euphemistic replacements: “gosh” for “God”, “darn” in place of “damn”, “heck” for “hell”, “son of a gun” for “son of a bitch”, “fudge” for…  In short, every expletive that you might use with children in the room.

But pervasive euphemisms are not limited to exclamations or insults. The the word “restroom” has long given the squeamish or polite an excuse to avoid saying “toilet” or any other descriptive term. (And who doesn’t prefer a woman who “powders her nose” to one who “shits”?) Some of these euphemisms have been in use so long that we’ve forgotten that they are not the original terms. For example, H.L. Mencken informs us that the word “rooster” only came into usage to avoid having to say the word “cock.”

In his book The American Language, Mencken explores the origins of many of these euphemisms and expletives and compares the American and British sensibilities. Slang is an excellent indicator that American English is thoroughly distinct from British English. (For a crude example on this point, ponder what it might mean “to bum a fag.”) I find The American Language especially interesting because language is constantly evolving and sensibilities are constantly changing along with them. The rapidity of these changes is astounding. A few short years ago, South Park positively could not be aired before 10 pm; last week, I saw a re-run before 10 am.

And even as some words become less and less taboo (remember that episode when the characters of South Park said “shit” over a hundred times?) other words become more taboo. The word “retard” is now considered so offensive that I’ve seen it censored when used in a technical sense other than mental retardation. Similarly, “crippled” has given way to “handicapped” or “disabled”, which have in turn given rise to the euphemisims “handicapable” and “differently abled.”

There are those who rail against such changes, but it is a natural part of the way language evolves. What is edgy or obscene can never remain the same because there are always people pushing and pulling at the limits of decency. Because of this constant flux, it is important to remember that the idea is what matters, not necessarily the word that is used to express it. So, by gosh, you’d better not take the Lord’s name in vain, even using euphemisms. 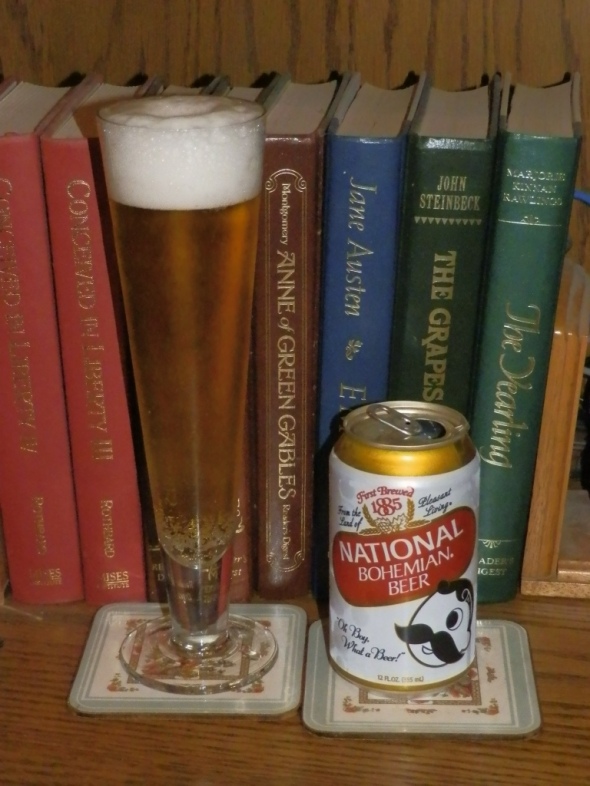 Beer of the Week: National Bohemian Beer – H.L. Mencken is known as “The Sage of Baltimore” and was also an avid beer-drinker. These facts lead me to the conclusion that Mencken consumed his share of National Beer in his day. I too have had quite a few National Beers. Unlike almost every other American college*, at my college “light beer”** was rarely consumed. We drank Pabst, Miller High Life, and National Beer. In college I could buy a six-pack of National for $3 and I regarded this as a benchmark for price. In Baltimore, (euphemistically known as “The Land of Pleasant Living”,) this beer is called “Boh” or “Natty Boh” or “Bay Water”. But I prefer to call it National Beer, a name more familiar when it was still brewed in “Charm City”. The beer itself really is pretty awful. It is over carbonated and it smells of sour grains. It is not as watery and bland as most cheap beers, but this may not be an advantage since it really does not taste that good. But I’ll still drink it at Orioles games (if the Heavy Seas vendor is too far from my seat); after all, it is nostalgia in a can.

Reading for the Week: The American Language by H.L. Mencken, Chapter 22 Expletives and Forbidden Words – This reading is partially interesting because it is fun to see how much things have changed since the early 20th century. (“Unwell” apparently referred primarily to “women’s troubles” at one time.) It is also partially interesting to see how much things have stayed the same. (All sorts of internal problems are still called “stomach aches” even if the actual source of discomfort is in organs that we prefer not to mention by name.) And finally, it is interesting because there are so many exciting “cusswords” that I can’t wait to try out!

Question for the Week: How aware are you of all the euphemisms that you use from day to day?