“We each of us fill a very small space
On the great creation’s plan,
If a man don’t keep his lead in the race
There’s plenty more that can;
The world can very soon fill the place
Of even a corner man.” – Banjo Paterson

Last week, some parts of the country got hit with a spring snow storm. Judging by the long-term weather forecast, that storm was old man winter’s last gasp. Another season has come and gone. Of course, this winter hardly showed up at all for some of us. (Standing outside in a t-shirt on Christmas Day was a first for me.) But seasons pass on to seasons, and each year is more or less the same as the last.

The same can be said for seasonal beers. Apparently the Boston Beer Company that has driven the demand for seasonal beers. I was told by an employee at the Red Hook brewery that everybody in the industry has started producing more seasonals, earlier (respectively) in the year to keep up with Sam Adams. As a big fan of beer variety, I can’t complain. However, the earlier seasonal beers are released, the earlier we give up on a season and move on. The calendar may say that it is spring, but I am not ready to quit on winter. And just because the days (and beers) march on, each one very much like the last, doesn’t mean we should give up on taking our time and enjoying the moment.

Beer of the week: Autocrat Coffee Milk Stout – Unless there is a deep, dark corner of my refrigerator that has been left unexplored, this is my last winter seasonal for the year. Narragansett Brewing Company’s milk stout is mixed with Autocrat brand coffee to create a brew that pours with a creamy dark tan head. The aroma is of mild coffee, which is not surprising. The lactose (another unusual ingredient) does not ferment, so it remains in the beer to sweeten it. Between the coffee, the lactose, and the dark roasted malt, this beer tastes almost like an iced mocha. Only the slight hoppy finish reminds one that this is a beer. And a delicious one at that.

Reading for the week: The Corner-Man by Banjo Patterson – This poem’s conclusion is that the world will “jog along just the same” after we die. In some respects, it is a very disheartening idea for those of us who think much of ourselves. On the other hand, it may be regarded as a liberating prospect. Oh, and I suppose that I ought to mention that the poem includes a minstrel show. I had no idea that there were minstrel shows in Australia.

Question for the week: What is the best season for beer?

They who hesitates is lost.

In the English language, we have gendered pronouns. Masculine: he, him, his. Feminine: she, her, hers. When discussing unidentified individuals, the traditional approach has been to use masculine pronouns. For example: “He who hesitates is lost.”

Recently, in terms of the development of the English language, there has been a push to change this practice in an attempt to be more inclusive of women. After all, females make up about half of the population and she who hesitates is equally lost. One approach to this problem is the use of the “singular they”. This is particularly common in the possessive. For example: “whoever said that I am spiteful better watch their back.” However, there is a lot of push-back against using the plural pronoun as a neuter singular. For one thing, it sounds queer to many people because it does not make grammatical sense to simply substitute a plural word in place of a singular one. Another strategy is to simply use the feminine pronouns rather than the masculine. This is generally effective, but can seem affected. It seems particularly affected when the context would clearly apply to a man far more often than to a woman. For example: “the perpetrator of a brutal multiple homicide can be held liable for emotional injuries she causes to the families of her victims,” or “one should make sure that she has applied Just For Men™ hair dye evenly throughout her mustache.” (Note that a woman certainly could commit brutal homicides or dye her mustache, but these acts are more likely those of a man.)

I am a bit of a traditionalist. I try to avoid the singular they entirely. I prefer the use of the masculine pronouns for unidentified individuals because it just sounds more natural to me. Of course, I will use the feminine where context clearly makes the individual more likely a woman. For example: “when choosing a brassiere, one should make sure that the elastic does not dig into her skin.” (Again, a man could purchase a bra for his own personal use, but the advice clearly applies more to women.)

The point of this post is not to engage in an argument about the changing role of women in society. I am not writing to claim that it is not important to encourage women to enter academic or professional fields that have traditionally been male dominated. Interest in mathematics, science, engineering, and all sorts of valuable studies should be fostered in all students who show an interest or talent in them, regardless of sex. My purpose in this post is simply to advise that choosing pronouns for the purpose of being inclusive should be secondary to choosing pronouns to make the author sound like he knows how the English language works.

I read a published court decision today that sacrificed clarity and general quality in an apparent attempt to be gender-inclusive. A federal judge, a person whose entire livelihood relies on his ability to clearly explain rules, reasoning, and conclusions, proposed this three-factor test to determine whether an attorney may disclose confidential information to prevent a future crime:

In three sentences about a single hypothetical attorney whose conduct is being evaluated, the judge used two masculine pronouns, two feminine pronouns, and the singular they. These word choices did not change the meaning of the paragraph, but it did make the whole thing unnecessarily complex. The last sentence is particularly bad. It refers to “their client” and then asks what “he believe[d]”.  The judge is asking about what the attorney believed, but it appears that he is asking what the client believed. Clarity has been sacrificed for… what? What real value did the judge add to this paragraph by indiscriminately bouncing from pronoun to pronoun?

Perhaps there are some people who would not have been distracted or confused by the judge’s word choice. Maybe the fact that I don’t like the way he writes says more about me than it does about him. But his job is to write, and he could have conveyed his thoughts more clearly by picking a gender and sticking with it. This paragraph makes his work look sloppy. If his writing is sloppy, people might assume that his reasoning is sloppy as well. And for a judge, that consideration should easily outweigh any desire to make everybody feel included.

Beer of the Week: Genesee Cream Ale – The first time I ever had this beer, I purchased it because it was the cheapest available option. If I recall correctly, before taxes it was less than 50¢ per can. Despite the name, “cream ales” do not contain any dairy products. (Unlike milk stouts, which are brewed with lactose for extra sweetness.) I actually find it to be very palatable. It does have a certain smoothness and nice body for a cheap, mass-produced beer, and at a price that is hard to beat.

Reading for the Week: At a Vacation Exercise in the College, Part Latin, Part English by John Milton – It is a significant understatement to say that Milton knew how to use language well. The excerpt of this address by he made while he was yet a student is a testament to the power of the English language in the right hands. After delivering an oration in Latin, Milton changes to English poetry and announces that it is the English language that is best equipped to attire the deepest and choicest thoughts.

Question for the Week: Do you think that the use of feminine pronouns when talking about unidentified individuals sounds affected? Is that a good enough reason not to do it?

Sad or depressed people will often sit in the dark. They may watch sad or depressing films or listen to sad music. What they want is for their surroundings to mirror their feelings. And this is no new thing. The narrator of Lord Byron’s poem My Soul is Dark requests that sad music be played for him. Music as dark as his soul.

But it is not just our controlled environment (lights, music, etc.) that we like to match our state of mind. In My November Guest, Robert Frost says that “dark days of autumn rain” are beautiful. They are even more beautiful, though, when he is sad. When he has sorrow in his heart, that sorrow rejoices to see the world as bleak and cold and barren.

So on this autumn day think dark thoughts, drink dark beer, and ponder how much more beautiful the world can be when it matches the way you feel. 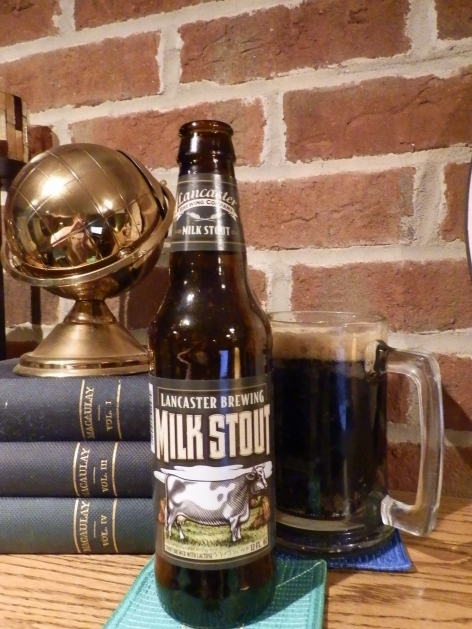 Beer of the Week: Lancaster Brewing Company Milk Stout – Apparently, yeast can’t ferment lactose. That fact makes lactose an interesting ingredient in beer, since it can increase sweetness without any fear of the sugar being converted into more alcohol. In this case, it results in a smooth and slightly sweet stout. There is not much hops to speak of. The dark malt provides some body to the flavor, but doesn’t impart any rough or smokey taste. Over-all, it is a satisfying and easy drinking beer, but it is pretty filling and not very flavorful.

Reading for the Week: My November Guest by Robert Frost – In this short poem, Frost doesn’t say that one must be sad to appreciate a cold, wet autumn day. But he does say that sorrow makes them all the better.

Question for the week: Some people suffer “Seasonal Affective Dissorder”, depression that comes and goes with the seasons. Did Frost really have a preference for November when he was depressed, or did the bleak weather cause his depression in the first place?