Ken M., one of the world’s finest internet trolls once complained that “today’s archeologists seem hellbent on making discoveries at any cost, leaving nothing for future generations.” He followed that statement up with the opinion that “they should at least plant new discoveries to replace the ones they harvested.”

It is a bizarre joke, but I think that it is hilarious. The funniest party is that people take him seriously despite his ludicrous statements. What makes the position so ridiculous is the implicit position that there may one day be nothing left to learn; that someday soon, man might reach the end of knowledge. But as Seneca wrote in his Natural Questions, “the world is a poor affair if it do not contain matter for investigation for the whole world in every age.”

What would it even mean for humans to reach the end of knowledge? Is it even conceivable for there to be nothing left to discover? On the sci-fi cartoon Futurama, alien beings got close to obtaining all knowledge, but they were then forced to destroy the universe before any new information was created. The world is always changing, so there is always more to learn.

And even in situations where immense quantities of raw information are known, that does not amount to knowledge. It is still necessary to interpret and synthesize the data. So do not give in to Ken M.’s fear that discoveries will run out. Seek boldly to learn everything that you can, knowing that there are plenty of mysteries left for the rest of us.

Beer of the week: Two Brothers Prairie Path – Speaking of new discoveries, somebody has discovered how to use enzymes to break down gluten. When I first got this beer, I did not notice that it is “Crafted To Remove Gluten”. Rather than brew the beer with gluten-free grains such as rice and sorghum, Two Brothers brews this beer with malt and then treats it with an enzyme that breaks down the gluten. Prairie Path is a pale, orange-gold color. The head fades very quickly. The aroma is vaguely of citrus and rice. The beer itself is a bit citrusy but feels very thin. It is a perfectly acceptable, easy-drinking beer. But I feel bad for those who are gluten intolerant if this is the most flavor they can get in a gluten-reduced beer.

Question of the week: Is there any field in which humans have genuinely learned all there is to know?

And don’t even get me started on graffiti…

The sun is shining. The breeze is warm and fresh. The mounds of snow start melting away to reveal mounds of garbage. City life is hell.

I can say without hyperbole that litterers are worse than Hitler. If you litter, you are a bad person, deserving of scorn and derision. Luckily, there is hope for you yet. You can be redeemed from your sinful ways. You don’t need to find Jesus or go to church or any of that. Just stop littering. It’s that simple. Don’t throw your trash on the ground like an asshole.

A friend of mine who was a smoker observed that all smokers litter. But truly I tell you, even smokers can be saved. I once met a smoker who had worked as a ski instructor in a national park. The penalties for littering cigarette butts in the park were severe. (Not to mention the forest fire hazard that cigarette butts would cause.) So he learned to put out his butts, pocket them, and throw them away when he got to a trash can. “But that’d make his clothes smell,” I can hear some of you smokers yelling at your computers like idiots. The thing is, his clothes already smelled like smoke because, you know, he was a smoker.

In the final analysis, litterers will always litter because of a problem identified by Professor Coase. Littering is a classic externality. Externalities exist when one person forces an expense or benefit on another person who had no choice whether or not to accept it. Litterers force the expense of cleaning up their trash on somebody else (society at large in a general way, though it actually falls on more or less specific parties.) According to Coase, if the litterer and the person charged with cleaning up trash could get their heads together, the clean up person could just pay the litterer not to do it and we would reach the most economic result. Unfortunately, the transaction costs of identifying all of the litterers and all of the people who suffer at the hands of the litterers would be far too high to be able to negotiate an economic result. Some people will always value the time it would take them to walk to the trashcan on the corner more than they will care about the cost they are inflicting on society, both monetarily and aesthetically. And those people are terrible. 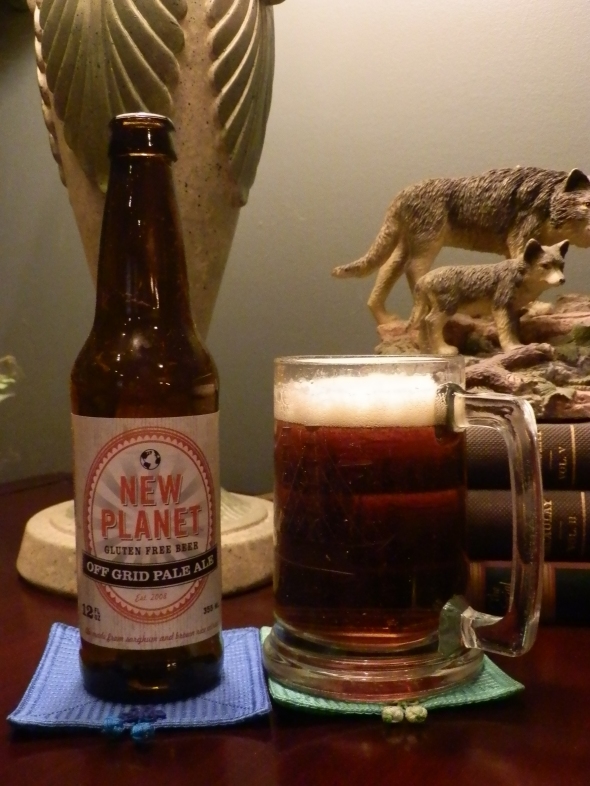 Beer of the Week: New Planet Off Grid Pale Ale – Gluten-free beer. Is nothing sacred? This beer has a sweet grainy smell. My first thought was that the aroma was malty, but there is no barley malt in it. The beer is actually very sweet, but the sweetness from sorghum and brown rice extract is decidedly NOT the same as sweetness from barley or rye malt. The beer is actually rather good tasting, but it is simply unlike other beers. If I ever had to go gluten-free, I would certainly miss the other options, but I could certainly see myself drinking this regularly.

Reading for the Week: Walden by Henry David Thoreau, Chapter 17 – For a beer called Off Grid Pale Ale, there could hardly be a reading more suitable than Walden. In this section, Thoreau describes watching sand and clay form into beautiful and familiar patterns as the snow melts and washes it slowly down hill. He sees in these rivulets all of nature’s splendor. The patterns in the sand are of a kind with leaves and blood vessels and butterfly wings; the very earth seems to be pulsing with life. This passage is a remarkable contrast to my own experience of watching the melting snow wash garbage slowly down the gutter.

Question for the Week: Do you litter? If so, did your parents do a dreadful job of raising you?