This is the thirty-first in a series on The Harvard Classics; the rest of the posts are available here. Volume XXXI: Autobiography, Cellini

There are some who argue that Pablo Picasso’s art should not be displayed, not because there is anything wrong with the art itself, but because Picasso was a misogynist. I do not know enough about his personal life to opine on whether the allegations are true (although at least one critic has questioned that account.) Even assuming all of the worst complaints about Picasso are true, could that justify burying his art? Or, to put it in less provocative terms: once the art is produced, can it be evaluated independently of analysis of the artist himself?

Benvenuto Cellini is a much older artist than Picasso and he was almost certainly a worse person. He was a philanderer (with both me and women.) And a prison escapee. And a murderer. And a generally pretty bad dude.

In his autobiography, Cellini recounts how he hired a model in part to revenge himself upon her husband. He writes: “I made her serve my pleasure, out of spite against her husband, jeering at them both the while. Furthermore, I kept her for hours together in position, greatly to her discomfort.” And when she grumbled about this mistreatment and bragged of her husband’s social position, Cellini lost his cool. “Yielding myself up to blind rage, I seized her by the hair, and dragged her up and down my room, beating and kicking her till I was tired. There was no one who could come to her assistance. When I had well pounded her she swore that she would never visit me again. Then for the first time I perceived that I had acted very wrongly; for I was losing a grand model, who brought me honour through my art. Moreover, when I saw her body all torn and bruised and swollen, I reflected that, even if I persuaded her to return, I should have to put her under medical treatment for at least a fortnight before I could make use of her.” Like I said, bad dude.

But like Picasso, Cellini produced some marvelous works of art. Consider his statue of Perseus and the Head of Medusa:

This bronze masterpiece was commissioned to stand alongside Michelangelo’s statue of David, as well as statues by Donatello. Cellini was evidently up to such a daunting assignment.

When I first saw the statue in person, I recognized the subject and was struck by the mastery of the work. I did not know, at the time, anything about Cellini or even that he was the sculptor. Now that I know more about him, I find the statue somewhat more intriguing. But in the end, it clearly stands on its own merits. Perseus is a noteworthy piece of art because of its quality, without regard to the qualities (or vices) of its sculptor.

That’s not to say that context does not matter. Perseus is an excellent example of the importance of context. Medusa’s gaze turned men in to stone, so the Perseus myth was a truly inspired choice for a piazza filled with marble statues. It is as if Cellini’s statue remade all of the other statues in the piazza as part of itself.

The historical and interpersonal contexts of Cellini’s and Picasso’s works are important as well. The patronage of the Medicis, Cellini’s checkered (to put it delicately) personal past, and his relationship with Michelangelo shed additional light upon his work. Likewise, Picasso’s personal relationships and offenses may illuminate how and why he produced the art that he did. The quality of the art does not excuse the acts of the man, but neither do his acts condemn the art; they only serve to help us understand each other.

Beer of the week: Steel Reserve 211 High Gravity Lager – European beer labels often include the beer’s specific gravity. (See, e.g. Šenkovní 10) In broad strokes, higher specific gravity means more sugar (traditionally from malt, but in a beer like this probably from cheeper “adjunct” grains), and more sugar means more alcohol. This “high gravity lager” is purpose-built for more alcohol. It is clear and golden. The aroma is faint but unappealing. The flavor is abrasive, with notes of slightly off apple juice and alcohol. Not a good choice.

This beer is paired with Cellini’s Autobiography because Steel Reserve has a special place in my own autobiography. One evening, at a gas station in Florida, my friend M– and I bought a few of cans Steel Reserve. Our decision was informed primarily by the beer’s 8.1% alcohol content. Anyway, it was Lent, so…

Reading of the week: The Autobiography of Benvenuto Cellini, Chapter LXXVIII – This chapter has none of the sex or violence or crime of much of the book. But it does describe how Cellini removed the statue of Perseus and the Head of Medusa from it’s mold, and seeing “in this the hand of God arranging and controlling all.” It is refreshing, in a way, to read about Cellini’s art rather than his vices.

Question for the week: Could Picasso (or any artist) have done anything so vile that one could not stand to look upon his art, no matter how beautiful it seemed before the artists sins were known?

A Drink With A Shade

This is the twenty-seventh in a series on The Harvard Classics; the rest of the posts are available here. Volume XXII: English Essays: Sidney to Macaulay

This blog is more than seven years old, yet somehow, the ultimate “question for the week” has not been asked: if you could have a beer with any author, who would you chose? And, to take it to another level, what beer would you order for the two of you? A few answers suggest themselves to me.

Helen Keller – Keller wrote in her autobiography, “I remember the morning that I first asked the meaning of the word, ‘love.'” Because she only began to learn language at the age of 7, she had distinct memories of her first words and her first exploration of language as a method for abstract thought. It would be amazing to converse with her about the nature of language and how it shapes thought. Because she is from Alabama, I would pick a light and refreshing kölsch. Unfortunately, I’d be worried about our ability to actually communicate. Although she learned to speak, she never could speak clearly enough to be understood by most people. And as for her understanding me, she’d need a translator or to feel my mouth move as I talk. Either way, it seems like a bit much to manage while having a drink. (Also, check out this video of her talking; it’s pretty wild.)

H. L. Mencken – I would love to hear Mencken apply his caustic wit to all of our modern inanities. With our current political and social climate, he would have a near limitless supply of zingers. Moreover, his humor may be a guide to truths that I might otherwise have missed. “The final test of truth is ridicule,” he wrote. “Very few dogmas have ever faced it and survived. Huxley laughed the devils out of the Gadarene swine. Not the laws of the United States but the mother-in-law joke brought the Mormons to surrender. Not the horror of it but the absurdity of it killed the doctrine of infant damnation. But the razor edge of ridicule is turned by the tough hide of truth. How loudly the barber-surgeons laughed at Huxley—and how vainly! What clown ever brought down the house like Galileo? Or Columbus? Or Darwin?” Because Mencken was such Teutonophile, I would order a German-style dark lager. It is possible, of course, that he would be too caustic (or just too big a fan of Nietzche) to be good company.

Francis Bacon – So many of the names that jump to mind in response to this question are people of whom I’d have a hundred questions. But I would want to drink with Bacon to hear what questions he has for me. Bacon revolutionized the way we think about inquiry in science and philosophy. I think I could learn a tremendous amount just hearing what he is curious about. (Also, I would try to suss out whether he was the real Shakespeare.) Because of Bacon’s interest in technology, I’d order something new and experimental. Perhaps a beer brewed with oysters or a beer “hopped” with cannabis. 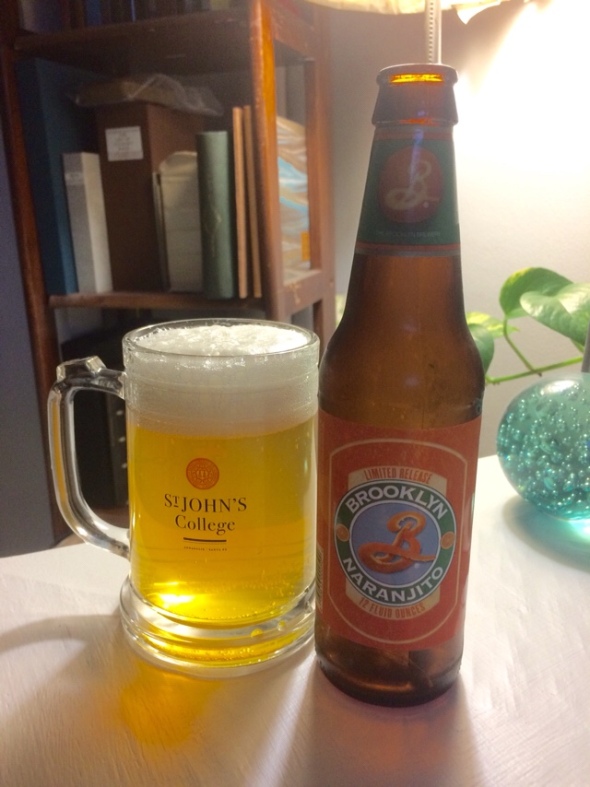 Beer of the week: Brooklyn Naranjito – Like several beers from Brooklyn Brewery, Naranjito is only getting limited releases around the world. This is a very pale and slightly hazy beer with a nice head of small white bubbles. The aroma of citrusy hops and orange zest is backed by that same citrus bitterness in the flavor. By the end of the sip, the bitterness is balanced by the malt, so the bitterness doesn’t hang in the throat as much as with some other beers. Because it is brewed with orange peel rather than orange juice or flesh, Naranjito’s orange notes are not especially fruity or sweet. Overall, a very nice beer.

Reading of the week: Of Persons One Would Wish to Have Seen by William Hazlitt – Although this essay is somewhat longer than the usual weekly reading, it is certainly worth the time. Hazlitt’s good friend (and fellow literary luminary) Charles Lamb scoffed at Isaac Newton, John Locke, William Shakespeare and John Milton as possible answers to this week’s question. Newton and Locke, he opined, were not personally interesting beyond their written works. And he’d gotten enough of an impression of Milton and Shakespeare from their portraits. The other suggestions in the essay range from Voltaire to Genghis Khan.

Question for the week: Who would you share a beer with if you could pick anybody? Tell us in the comments below.