Buck up, do your damnedest, and fight.

In 1911, a mere two years after the Harvard Classics was first published, Douglas Mawson (later Sir Douglas Mawson) led an expedition to map the coastline of Antarctica. He was an adventurer and a hero, but he was a man of science first. The great proof of this is not only in his scientific achievements, but also in his very attitude toward his objectives.

In 1912, Mawson was part of a brutal race against time and weather to get back to the base camp. He was part of a three-man surveying party that had pushed over 300 miles into (quite literally) uncharted territory. Suddenly, one of the dogsleds disappeared into a crevasse. With it went one of the men, B. E. S. Ninnis, the better half of the dogs, and most of the rations. Mawson and his remaining companion, Xavier Mertz, with little food (and no dog food) turn back to camp faced with the very real possibility that the weather and lack of supplies would thwart their attempted return.

Frostbite was a problem for them. But even worse was a condition called hypervitaminosis A. When humans consume too much vitamin A, they can suffer from adverse mental effects, hair and skin loss, and a slew of other nasty effects. And it just so happens that husky livers are chock-full of vitamin A. Of course, Mawson and Mertz did not know that; vitamin A was not even named until 1920. So when it came time to eat the sled dogs, they ate them liver and all. The results were deadly.

After nearly a month of trudging, eating stringy dog meat, and deteriorating health, Mertz succumbed. With the wind howling outside of the tent, his team members dead, and his own collection of physical ailments, Mawson considered just staying in his sleeping bag. It would be easy to just stay in the bag forever. But instead, he remembered this poem by Robert W. Service:

When you’re lost in the Wild, and you’re scared as a child,
And Death looks you bang in the eye,
And you’re sore as a boil, it’s according to Hoyle
To cock your revolver and… die.
But the Code of a Man says: “Fight all you can,”
And self-dissolution is barred.
In hunger and woe, oh, it’s easy to blow…
It’s the hell-served-for-breakfast that’s hard.

“You’re sick of the game!” Well, now, that’s a shame.
You’re young and you’re brave and you’re bright.
“You’ve had a raw deal!” I know — but don’t squeal,
Buck up, do your damnedest, and fight.
It’s the plugging away that will win you the day,
So don’t be a piker, old pard!
Just draw on your grit; it’s so easy to quit:
It’s the keeping-your-chin-up that’s hard.

It’s easy to cry that you’re beaten — and die;
It’s easy to crawfish and crawl;
But to fight and to fight when hope’s out of sight —
Why, that’s the best game of them all!
And though you come out of each gruelling bout,
All broken and beaten and scarred,
Just have one more try — it’s dead easy to die,
It’s the keeping-on-living that’s hard.

(Service, by the way, is known as the Bard of the Yukon. How appropriate for someone struggling for life near the South Pole to get strength from a poet of the far north.)

And those words inspired Mawson to break camp and trudge on. The day he buried Mertz in the snow, Mawson wrote in his journal: “I read the Burial Service over Xavier this afternoon. As there is little chance of my reaching human aid alive. I greatly regret inability at the moment to set out the detail of coastline met with for three hundred miles travelled and observations of glacier and ice-formations, etc.; the most of which latter are, of course, committed to my head.” See what I mean about Mawson’s attitude toward his geographic work?

Over the next thirty days, Mawson made his way back toward base. At one point, he fell through the ice. However the sled, what was left of it, wedged in the opening of the crevasse, and Mawson dangled from a rope above the abyss. Despite his weakened state, he hauled himself up, only for the edge to break away beneath him and leave him hanging once more at the end of the rope. He summoned all of his strength for one final attempt and dragged himself from the gulf in the ice.

Eventually, Mawson made it back to base camp. He returned without his companions, without his dogs, and without much of his skin and hair. What he did bring back was a great deal of geographical information, including names for two large glaciers on the Antarctic coast: Ninnis Glacier and Mertz Glacier. 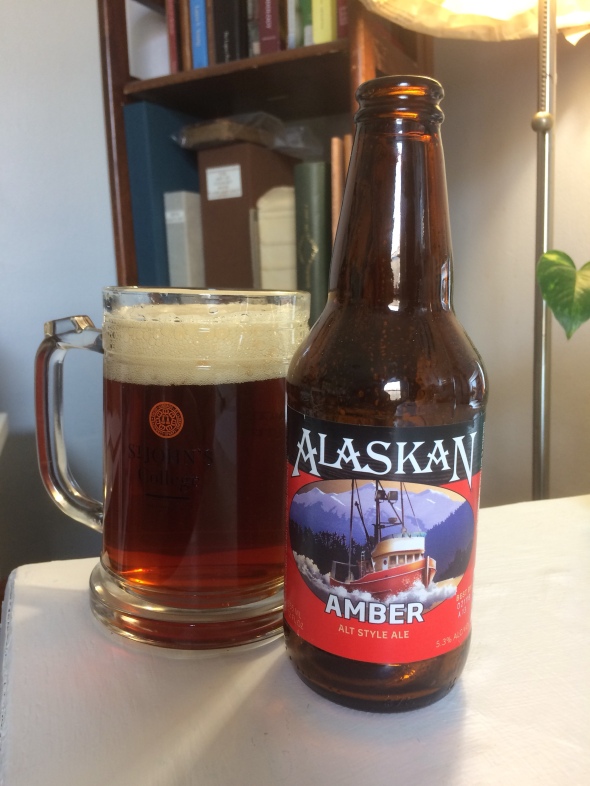 Beer of the week: Alaskan Amber – Alaska has many nicknames, including “The Last Frontier”. But Mawson’s account of Antarctica makes Alaska seem relatively tame. And at least Alaska has breweries. From Juneau comes this delightful amber ale. It pours a clear dark amber with a good head. It smells mostly of roasted malt. The beer is smooth and malty, with hints of marshmallow and apricot. Delicious.

Reading of the week: Geographical Evolution by Sir Archibald Geikie – At the beginning of this essay, Geikie writes, “From the geographical point of view… we must rank an explorer according to his success in widening our knowledge and enlarging our views regarding the aspects of nature.” In this respect, Mawson ranks very highly among the great Antarctic explorers.

Questions of the week: As great a story as it is, is it even possible that the information gathered by the Australasian Antarctic Expedition was worth the human suffering and death?