This is the forty-seventh in a series on The Harvard Classics; the rest of the posts are available here. Volume XLVII: Elizabethan Drama 2

“Let the wine be plentiful as beer, and beer as water. Hang those penny-pinching fathers that cram wealth in innocent lamb-skins.” Thus Simon Eyre, the mayor of London, opens the feast at the end of Thomas Dekker’s The Shoemaker’s Holiday. But very few coffers are deep enough to long sustain such a prodigious flow of libations, and the play is somewhat ambiguous on the virtue of thrift.

Earlier in the play, before Eyre was mayor, he promised his workmen a dozen cans of beer. But when he placed the order, he slyly told the errand boy to purchase only two. When the delivery came up ten cans short of the promised dozen, Eyre feigned surprise, but was clearly glad to get twelve cans’ worth of good cheer from his workers for the price of two.

At the beginning of the play, another character relates how his nephew wasted a veritable fortune, reveling his way across Europe:

A verier unthrift lives not in the world,

Than is my cousin; for I’ll tell you what:

’Tis now almost a year since he requested

To travel countries for experience.

I furnished him with coins, bills of exchange,

Letters of credit, men to wait on him,

Solicited my friends in Italy

Well to respect him. But to see the end:

Scant had he journey’d through half Germany,

But all his coin was spent, his men cast off,

His bills embezzl’d, and my jolly coz,

Became a shoemaker in Wittenberg,

Of course, the time spent as a shoemaker ends up serving the young man very well, but one can hardly argue that carousing to the point of bankruptcy is sound policy.

If The Shoemaker’s Holiday has a lesson regarding thrift, it seems to be that one should be willing to spend money for the sake of enjoyment, particularly the enjoyment of others, but not to live beyond one’s means. Lacy was wrong to waste so much of his uncle’s money in Europe, and Eyre was arguably justified in buying his men less than the dozen beers he promised. But once Eyre’s fortune was made, he quite laudably spent a great deal of it on feasting the shoemakers.

So let the beer be as plentiful as water… so long as you can cover the bar tab.

Beer of the week: Broegel Bock Beer – One way to stretch the beer budget is to buy “store-brand” beer. Aldi grocery stores sell a few beers that appear to be “knock-offs” of better known (and slightly more expensive) beers: Kinroo Blue (Blue Moon), Independence Harbor (Sam Adams), Cerveza Monterey (Corona). Based on the label of Broegel Bock, I assumed that this was simply Aldi’s version of Shiner Bock. The packaging is extremely similar. However, I was pleasantly surprised. Broegel is brewed by Brouwerij Martens NV, a prominent white-label brewery in Belgium. The beer is dark amber with a tan head of very large bubbles. The aroma is of bread and caramel. The flavor matches the smell, with sourdough notes to go with the sweet dark malt. This is a much better beer than Shiner Bock.

Reading of the week: The Shoemaker’s Holiday by Thomas Dekker – To be a minute late to this play would mean missing some very important plot points. The opening conversation establishes the forbidden relationship that drives the action of the play.

Question for the week: The balance between quantity and quality is difficult to establish. Is an $18 six-pack really twice as good as a $9 six-pack?

This is the twenty-third in a series on The Harvard Classics; the rest of the posts are available here. Volume XXIII: Two Years Before the Mast, Dana

In the preface to Two Years Before the Mast, Richard Henry Dana, Jr. warns: “I have been obliged occasionally to use strong and coarse expressions, and in some instances to give scenes which may be painful to nice feelings; but I have very carefully avoided doing so, whenever I have not felt them essential to giving the true character of a scene.”

Perhaps the most extended example “strong and course” language Dana employed was in relating a telling-off that the crew of his ship received from their captain:

“Away with you! go forward every one of you! I’ll haze you! I’ll work you up! You don’t have enough to do! If you a’n’t careful I’ll make a hell of the ship!…. You’ve mistaken your man! I’m F—— T——, all the way from ‘down east.’ I’ve been through the mill, ground, and bolted, and come out a regular-built down-east johnny-cake, good when it’s hot, but when it’s cold, sour and indigestible;—and you’ll find me so!” 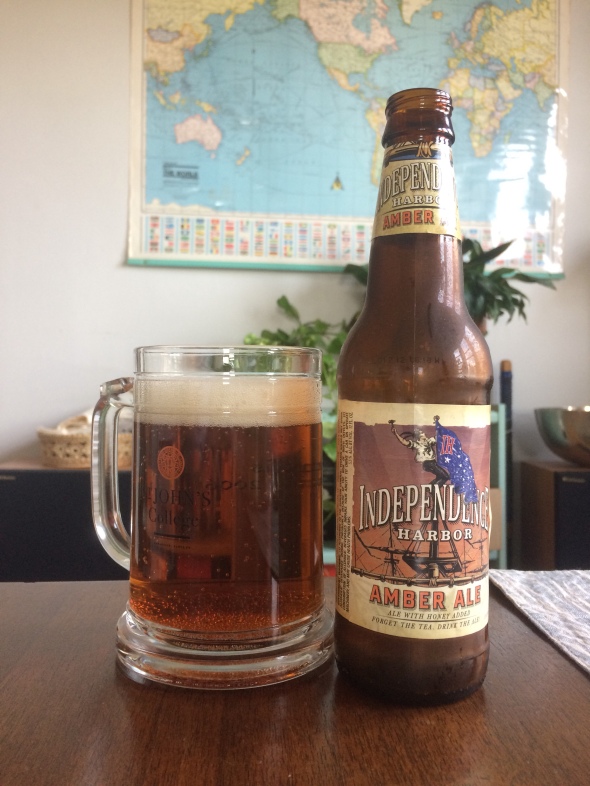 Beer of the week: Independence Harbor Amber Ale – This is an ALDI house brand. It had been known as Revolution Harbor, but the name has changed for some reason. Either name seems to allude to Boston Harbor (and perhaps hint at the beer being similar to Samuel Adams). Boston, of course, is where Dana’s life as a sailor began. Independence Harbor is a handsome amber beer with a decent tan head. The aroma is of biscuit. The flavor is the same, with just a bit of honey sweetness at the finish. For the price, this is a very solid beer.

Reading of the week: Two Years Before the Mast by Richard Henry Dana, Jr., Chapter VIII – I’ve really enjoyed this book. From his descriptions of life onboard a merchant ship in the middle of the 19th century, to his exploration of Californian culture in the days before the gold rush, Dana’s paints vivid scenes. This chapter includes discussion of sailors’ slang, duties onboard, and the ship’s arrival in California. If you enjoy this chapter, the rest of the book should be, in Dana’s language, “nuts to you.” (That’s a good thing.)

Question for the week: It is often said that profanity shows a lack of imagination, but can’t the stringing together of profanities be an art of its own?