I was not surprised that the recent terrorist attacks in Paris elicited a strong emotional response (at least among people whose facebook posts appear on my feed.) I was surprised, however, that the attacks in Brussels seemed to get far less attention among the same people. The general sense that I get is that the disparity results from the much closer historical and cultural connection between France and the US of A. But I have Belgian friends, and Belgian beer blows French beer out of the water, so I am sending all of my well-wishes in that direction. (Not that my sentiments are worth anything, but that is what I have to give at the moment.)

Whether in Belgium, France, or anywhere else, the occasion of catastrophe on the other side of the world is an interesting opportunity to reflect on our shared humanity. Why do we care if Belgians are bombed? If Frenchmen are shot? If some natural disaster befalls a distant land? Because we are humans, damn it! And so are those people. Do we do anything about it? Well… maybe nothing very helpful. But we at least take note.

Obviously, I am not the first person to ask why we should care about the calamities that befall people we will never meet. Adam Smith pondered the question over two and a half centuries ago in The Theory of Moral Sentiments:

Let us suppose that the great empire of China, with all its myriads of inhabitants, was suddenly swallowed up by an earthquake, and let us consider how a man of humanity in Europe, who had no sort of connexion with that part of the world, would be affected upon receiving intelligence of this dreadful calamity.

He would, I imagine, first of all, express very strongly his sorrow for the misfortune of that unhappy people, he would make many melancholy reflections upon the precariousness of human life, and the vanity of all the labours of man, which could thus be annihilated in a moment. He would too, perhaps, if he was a man of speculation, enter into many reasonings concerning the effects which this disaster might produce upon the commerce of Europe, and the trade and business of the world in general. And when all this fine philosophy was over, when all these humane sentiments had been once fairly expressed, he would pursue his business or his pleasure, take his repose or his diversion, with the same ease and tranquillity, as if no such accident had happened. The most frivolous disaster which could befall himself would occasion a more real disturbance. If he was to lose his little finger to-morrow, he would not sleep to-night; but, provided he never saw them, he will snore with the most profound security over the ruin of a hundred millions of his brethren, and the destruction of that immense multitude seems plainly an object less interesting to him, than this paltry misfortune of his own. To prevent, therefore, this paltry misfortune to himself, would a man of humanity be willing to sacrifice the lives of a hundred millions of his brethren, provided he had never seen them? Human nature startles with horror at the thought, and the world, in its greatest depravity and corruption, never produced such a villain as could be capable of entertaining it. But what makes this difference? When our passive feelings are almost always so sordid and so selfish, how comes it that our active principles should often be so generous and so noble?

The age of the internet has changed this aspect of life but little. Now our expressions of sorrow and our reasonings concerning effects take place online, allowing us to interact with a much wider group of people. Now we have instant access to news about events that, in Smith’s time, may have taken months to reach us. But perhaps most importantly, we can now see what’s happened in photographs and videos, bringing every tragedy closer to home in a way that Smith believed foreign events could never be. This, of course, cuts both ways. The immediate and graphic way in which we are able to perceive these events increases the impact of terrorism. But it also allows us to more readily experience the shared humanity that drives us to care at all. 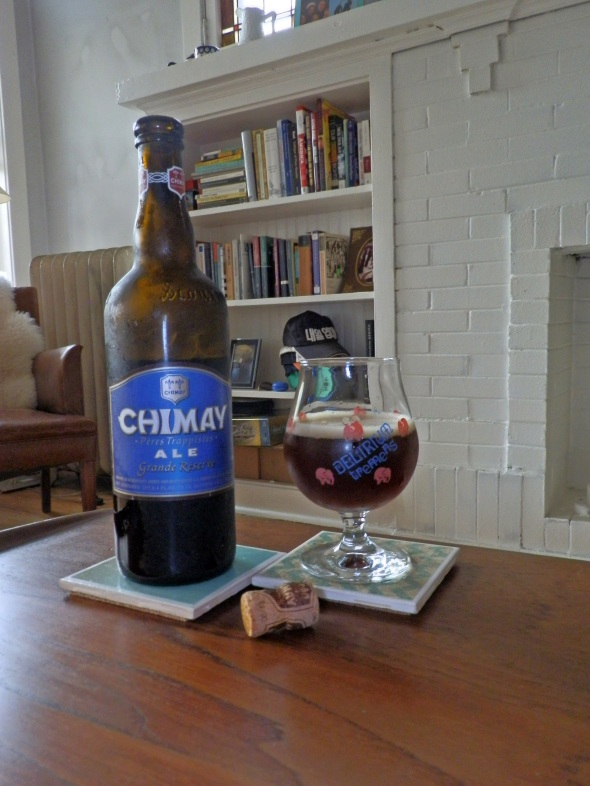 Beer of the week: Chimay Grande Réserve a.k.a. Chimay Blue – When I visited Belgium a few years ago, I imbibed many excellent beers. Like La Trappe, Chimay produces “Authentic Trappist Ale” inside the walls of a monastery. This, their strong dark ale, is orange-brown with a creamy tan head. The beautiful aroma is sweet and slightly sour. The ale itself is super smooth. The flavor is full, sweet, and delicious with notes of sweet biscuit.

Reading of the week: The Theory of Moral Sentiments by Adam Smith – After the above-quoted section, Smith goes on to discuss the conflict between self-love and humane impulses. He attributes much to what Freud would later call the superego.

Question of the week: What do you do in response to distant catastrophes?