It Just Shows You

No wasting time at Shafters or [a name, indecipherable]
No more smokeing or chewing
Bath every other day
Read one improving book or magazine per week
Save $5.00 [crossed out] $3.00 per week
Be better to parents”

These are the resolutions of a young man with some ambition. Specifically, they are the resolutions of the titular character of F. Scott Key Fitzgerald’s The Great Gatsby long before he was “great” (or “Gatsby” for that matter.) It is almost beyond doubt that everybody could improve himself by adopting resolutions along the same lines. Or rather, by actually following through on those resolutions.

The problem with resolutions is that they are composed principally of words and and words are cheap. Very often, resolutions are made almost entirely devoid of resolve. Or perhaps the resolve runs out before the positive results of the resolution can be felt. How many gym memberships are opened in January and abandoned by March? How many Lenten disciplines are cheated on, or quit entirely before a mere 40 days can elapse?

A man who is constantly making resolutions has taken but a single step toward self-improvement:  he has recognized that self-improvement is needed. As important as that first step is, it is remarkably easy to simply repeat without making any further progress. 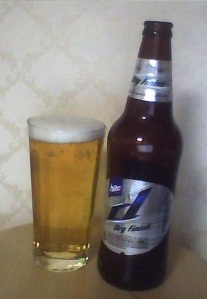 Beer of the Week: d Dry Finish – Korean beer makers seem forever resolving to improve the quality of their beers. This resolution almost always takes the form of “make beer that is like foreign beer.” Hite’s d Dry Finish is modeled after the Asahi from Japan. Asahi is the original “dry beer.” Basically, beer is “dry” when there is little or no sugar left after fermentation. This lack of sugar makes the finish crisp, clean and slightly hoppy. The resolution to make a better beer actually makes some progress in this case; as far as Korean beers go, d is among the best. Even though it is not exceedingly flavorful, the dryness lets what hops there are shine through without being drowned out by adjunct sweetness. I think that d is remarkable among Korean beers for being “beer flavored” instead of “water flavored.”

Reading for the Week: The Great Gatsby by F. Scott Key Fitzgerald, Chapter 9, Excerpt – The daily schedule of the young Gatsby may give some insight into how a nondescript young man became the mysterious “Great Gatsby.” It doesn’t shed light how he got his money or how he came to be the toast of Long Island, but perhaps it illuminates how he became the man.

Question of the week: Gatsby’s father repeatedly says that the daily schedule and list of resolutions “just shows you.” What does it show you, really? Does it show the same thing that he thinks it shows?