The Bliss of Solitude

I recently received a letter in which my friend announced his intention to stop arguing with people when they say that they do not like winter. He is convinced of the correctness of his love for winter and anything that is already true and right does not need to be defended. There is no need for him to argue because being right is its own victory.

To the extent that winter means skiing and hot apple cider with rum, I think that it is clear how winter is wonderful. To the extent that my breath freezes in my mustache and my neighbors never shovel their sidewalk, winter is dreadful. Luckily, when winter becomes overly oppressive, we are at liberty to turn our minds to warmer subjects and grant ourselves respite from winter’s weary ways.

So if you are cold and longing for fairer weather, imagine a sunny day with a warm and gentle breeze. And from the top of a lush green hill, you look down on a sparkling, blue lake. Along the cost of the lake are myriad golden daffodils fluttering in the aforementioned breeze, almost dancing.

Doesn’t that sound pleasant? Doesn’t it sound familiar? It should; after all, that is the scene that William Wordsworth conjures in the poem I Wandered Lonely as a Cloud. In the poem, Wordsworth claims that he imagines the daffodils when he is “In vacant or in pensive mood,” but I wouldn’t be surprised if he also turns his mind to that beautiful spring day when he gets fed up with winter.

Beer of the Week: Kunstmann Lager – I’ve never been to South America, but I have been led to believe that it is currently summer there. So I’ve decided to pair this reading with a Chilean beer. Kunstmann Lager is very clear and light. It is alright, but somewhat weak in the flavor department. One can taste hints of the same malt flavors found in Kunstmann Bock and Kunstmann’s Pale Ale, however, it is not quite as good as either of those two. It really is a decent beer and is better than many similar beers, but it is still my least favorite so far from this Chilean brewer.

Reading of the week: I Wandered Lonely as a Cloud by William Wordsworth – The reading last week was from English Traits by Emerson. I was so impressed with the people that Emerson got to meet personally, that I’ve decided to read works by many of them. So here is the first of a series of readings inspired by English Traits: a lovely little poem about flowers and the ability to “flash upon that inward eye” and imagine beautiful scenes.

Question of the week: Where is your “happy place”?

Rudyard Kipling’s poem If— pretty much deserves a line by line analysis of how it is awesome description of what it is to be a virtuous man.* Unfortunately, that would take too long and would be redundant since most of the poem is self-explanatory. A few lines take a bit of thought to sort out, however.

For example, the line “If you can think—and not make thoughts your aim,” is not self-evidently virtuous. “If you can think—” is an interesting clause. Every person thinks, so it seems likely that Kipling means “If you can think well.”  The ability to organize one’s thoughts and to use one’s reason seems like a sort of virtue in itself, but there is more to it than that. The ability to think may be the very source of virtue. One could argue that without rational thought, virtue is impossible. Rarely do we ascribe virtue (and even more rarely vice) to animals and plants; their actions are guided by instinct, not reason. Is it virtuous to breathe? Or to blink? Can any action be virtuous that is involuntary? And what is a “voluntary” action except one that requires thought?

But the second half of that line, “and not make thoughts your aim,” is a bit trickier. If “thoughts” are not the proper aim, what is? Are “thoughts” being set up in opposition to “thought” in general? That is, is Kipling exhorting his son to avoid becoming obsessed with specific ideas instead of properly appreciating a more rounded “life of the mind”? Many intellectuals would like this to be the answer:  thought (in the sense of philosophy) as the proper aim of life. However, I suspect that Kipling has a more active aim in mind.

The whole poem seems to be a call to action, but action is not a proper aim in itself. Unlike philosophy, which may exist for its own sake, action ought to have a separate aim. Little harm can come of thinking for the sake of thinking, but acting for the sake of acting can be dangerous. One ought “not make thoughts or action their aim,” action must be toward some external goal.

So what is the proper aim of life? It seems by the end of the poem that it is to “be a man”. Perhaps simply fulfilling the promise of this poem is the real aim one should strive for. 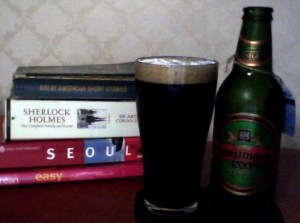 Beer of the Week: Kunstmann Bock – Goodness, how very dark this beer is! The head is rather quick to fade, but is a lovely tan color on top of the nearly black beer. The taste is absolutely dominated by smokey malt. Some burnt caramel may be detected in the flavor and there is a hint of dark roasted coffee in the finish.  The beer is smooth and thick (for a lager) and although I do not particularly care for such dark beers, this offering from Kunstmann is quite good. Not altogether surprising after reviewing Kunstmann’s Pale Ale.

Reading of the week: If— by Rudyard Kipling – This poem is just about impossible to read without feeling inspired. It encourages level-headedness,  a stoic attitude toward adversity, and always giving one’s best effort.

Only seconds after the opening kickoff, Tom went to ground clutching his knee and screaming. He had torn some cartilage; his season may have ended prematurely. Only minutes later, a shout came from the field, “don’t let the ambulance leave yet!” Richard had just taken a heavy tackle and was similarly left on the ground with an apparent knee injury. Evaluation later showed a broken tibia and two torn cruciate ligaments. He won’t be playing rugby for quite some time.

Mr. Bedford, the narrator of H. G. Wells’ The First Men in the Moon found himself in a similar situation. If any Earthly experience can be called “similar” to being stranded on the moon. (Aside from the fact that Tom, Richard and Bedford are all English,) what they have in common is that none of them was content “simply to go about being safe and comfortable and well fed and amused.” Something, it seems, “urges [man] for ever to depart from happiness and security, to toil, to place himself in danger, to risk even… death.” But what is this force that drives men to do “unreasonable things?”

In every action, man is making a bargain, and no man makes a bargain unless he has decided that he profits by it. That is not to say that he is always right, but life is a constant cost/benefit analysis. Bedford went to the moon because he saw the potential for great material wealth. He reasoned, perhaps not carefully enough, that the odds of becoming rich outweighed the odds of dying on some foreign world. Tom and Richard decided the reward of enjoying their physical prowess on the rugby pitch was worth the risk of injury that comes with such an endeavor.

Bedford says, “that all my life I had in truth never served the purposes of my private life.” But he is mistaken. He is not subject to some outside force that causes him to make choices to that serve its grand scheme. He only seems to be working against his own personal interest because he has proved to be a poor judge of what he really wants and what he really needs. If the risks were really greater than the potential rewards, he has only himself to blame for not analyzing them adequately beforehand.

Beer of the Week: Kunstmann Torobayo Pale Ale – Long before anybody was seriously thinking of setting off on dangerous trips to the moon, Europeans were setting off on dangerous trips to uncharted terrestrial worlds. Kunstmann may not seem like a Chilean name, but back in the middle of the 19th century, quite a few Germans immigrated to South America. And they brought beer brewing with them. This, my first ever Chilean beer, is a great take on the classic English pale ale. It is light amber in color and has an aroma of caramel and fruit with just a hit of fresh grass. The taste meets and exceeds expectations after the smell, with plenty of caramel flavor in the finish with just a small bite of hops. Really, a delightful beer.

Reading of the week: The First Men in the Moon, by H. G. Wells, Chapter 19, Excerpt – Lost and alone in a world altogether unlike his own, Mr. Bedford is given an opportunity to reflect on how and why he made the trip to the moon.

Question of the week: In Bedford’s case, the decision to go to the moon was primarily the potential for great wealth. It is easy to see the risk/reward analysis in such an endeavor. But others have sought out adventure seemingly for adventure’s sake. How does one assess the amount of risk that is reasonable if the reward is something as abstract as “adventure”?