This is the third in a series on Franklin’s moral improvement plan, the rest of the posts are available here.

SILENCE: Speak not but what may benefit others or yourself; avoid trifling conversation.
– Franklin

Julian I was bent on restoring the Roman Empire to it’s past glory. He was known later as Julian the Apostate, because he worshiped the old gods of Rome rather than the Christian God adopted by his grandfather Constantine. He was also a notable man of letters.

Among his extant writings is a satire entitled The Caesars. In it, a feast is held by the gods and all of the Roman emperors are invited. (Not all, however make it into the party. Some of the cruel or incompetent Caesars are turned away at the door, or even condemned to Tartarus.) Once the party is assembled, the gods have a contest to decide which emperor is the greatest.

Julius, Augustus, Trajan, Constantine, and Alexander the Great (invited especially by Hercules) all recount their military exploits, and argue about why their victories were more impressive than those of the others. Marcus Aurelius, however, “turned to Zeus and the other gods and said, ‘It seems to me, O Zeus and ye other gods, that I have no need to make a speech or compete. If you did not know all that concerns me it would indeed be fitting for me to inform you. But since you know it and nothing at all is hidden from you, do you of your own accord assign me such honour as I deserve.’ Thus Marcus showed that admirable as he was in other respects he was wise also beyond the rest, because he knew ‘When it is time to speak and when to be silent.'”

Beer of the week: Lomska Dark Lager – The lands that are now Bulgaria, of course, would have been ruled by Alexander the Great and later by the Romans. This Bulgarian lager is not especially good. It foams like a soda pop when poured, with big sticky bubbles. However, the head had faded entirely before I could snap a photo. By the first sip, the brew was all but flat. The aroma has some of the burnt, savory smell of grilled mushrooms. The flavor is a bit on the sweet side, with very little bitterness to help balance it out. Overall, I am not impressed.

Reading for the week: The Caesars by Julian I – The contest continues on for some time after this excerpt. Unsurprisingly, Marcus wins the day and Constantine gets punished for following Jesus rather than the gods of Rome.

Question for the week: Why is it so hard to hold one’s tongue on Facebook (and other online fora)?

This weekend is ANZAC weekend. That means that it has been 101 years since some nine-hundred thousand young men from around the globe engaged in bloody battle in rocky terrain of the Gallipoli Peninsula in Turkey. The Turks successfully defended their homeland against the foreign invaders, but only after 9 months of brutal trench warfare. Winston Churchill, the mastermind of the Campaign, resigned in disgrace even before the final retreat. (Of course, he found his way back into power later on in life.)

The Battle of Gallipoli is particularly interesting because of the way that it encapsulated the notion of a “World War”. From the point of view of Western Europeans and Americans, this campaign was fought in an obscure theater, between obscure nations. Little enough attention is paid to WWI in schools as it is, but American students certainly learn next to nothing about the Turkish defense of the Dardanelles against Australians and New Zealanders. (To say nothing of the English colonials from Canada and India.) Only the fighting in Africa or Asia seems more remote to the traditional narrative of World War I.

Of course, the Gallipoli Campaign also inspired one of the great anti-war folk songs of all time, And The Band Played Waltzing Matilda by Eric Bogle. One of the scenes presented in the lyrics is the trooper ships departing Circular Quay in Sydney. “And amidst all the cheers, the flag-waving and tears, we sailed off for Gallipoli.” This is echoed in a later verse when “the crippled, the wounded, [and] the maimed” soldiers are shipped home, only to find that “nobody cheered, they just stood and stared, then they turned all their faces away.” The imagery calls to mind the beginning and the end of the Sicilian Expedition as described by Thucydides:

“Early in the morning of the day appointed for their departure, the Athenian forces and such of their allies as had already joined them went down to the Piraeus and began to man the ships. Almost the entire population of Athens accompanied them, citizens and strangers alike. The citizens came to take farewell, one of an acquaintance, another of a kinsman, another of a son, and as they passed along were full of hope and full of tears; hope of conquering Sicily, tears because they doubted whether they would ever see their friends again, when they thought of the long voyage on which they were going away. At the last moment of parting the danger was nearer; and terrors which had never occurred to them when they were voting the expedition now entered into their souls. Nevertheless their spirits revived at the sight of the armament in all its strength and of the abundant provision which they had made. The strangers and the rest of the multitude came out of curiosity, desiring to witness an enterprise of which the greatness exceeded belief.”

Like the ANZACs some 2,330 years later, the Athenians met with disaster when they decided to wage war across the sea. In the end, nearly the entire Athenian force was captured. The vast majority died in the wretched conditions of a make-shift prison camp in a rock quarry.  It is cliche to say that history repeats itself, but somebody has to say it if we are ever to break the cycle. 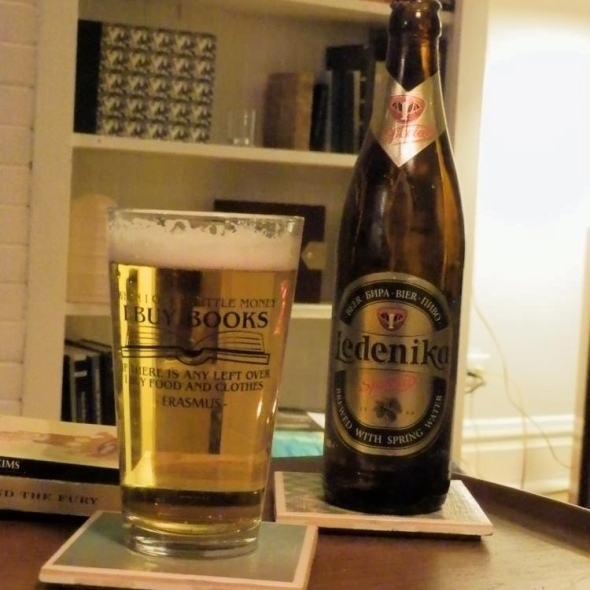 Beer of the week: Ledenika Special – Bulgaria did not enter World War I until after the Gallipoli Campaign was well underway. As it turns out, Bulgaria ended up joining the wrong side. The Turks won the Battle of Gallipoli, but they and their allies lost the war. Ledenika is my first ever Bulgarian beer. The brew is very clear, very pale, and smells of crackers. The flavor is also reminiscent of crackers. Ledenika is very average, but it is always nice to try a brew from another country.

Reading of the week: History of the Peloponnesian War by  Thucydides, Book VI, Chapters 8-15 – Not everybody was waving flags and cheering at the Piraeus as the Athenians boarded their ships. Nicias, one of the generals, had tried in vain to convince the people that the Sicilian Expedition was a bad idea. This reading is one of his speeches, which, prophetic as it was, failed to dissuade the population once the war drums had been beat.

Question of the week: What is different about the Sicilian Expedition and the Gallipoli Campaign?