← Sights and Sounds
I Don’t Know →

In Defense of Idleness

It is well-established that taking breaks improves production. Periodic breaks, whether to stretch your legs or just to think about something other than work, are not a waste at all. Rather, they are part of staying healthy and productive.

Even more extended “time-wasting” can have value. Reading a trashy novel, watching sitcom reruns, or playing a cell phone game are all defensible uses of time. For one thing, if you are actually enjoying the book, TV show, or video game, it is certainly not a total waste. The Teacher commends the enjoyment of life and says that there is nothing better for man to do than to be merry. So if you get more enjoyment from reading Twitter feeds than you would from more “productive” pursuits, that’s not so bad.

And as impressive as it would be to “relax” by taking a deep dive into metaphysical philosophy or intense language study, that is simply not realistic for most people. One cannot give maximum effort every waking hour.

Of course, this is not to say that one ought to be totally idle. Television, social media, and the like often are dangerous time-wasters. The point is to be conscious and conscientious about how your time is spent. All too often we lose track of how much time we have spent. We suddenly realized that we have watched an entire television series in one sitting, or that we spent an hour on a cellphone game that we started playing for no particular reason. The biggest waste of time is letting it slip by unnoticed. So watch your favorite show, read some chuckle-headed beer blog, leisurely sip a beer while doing nothing at all productive. But do those things with the goal of enjoyment. Be mindful; do not merely waste time. 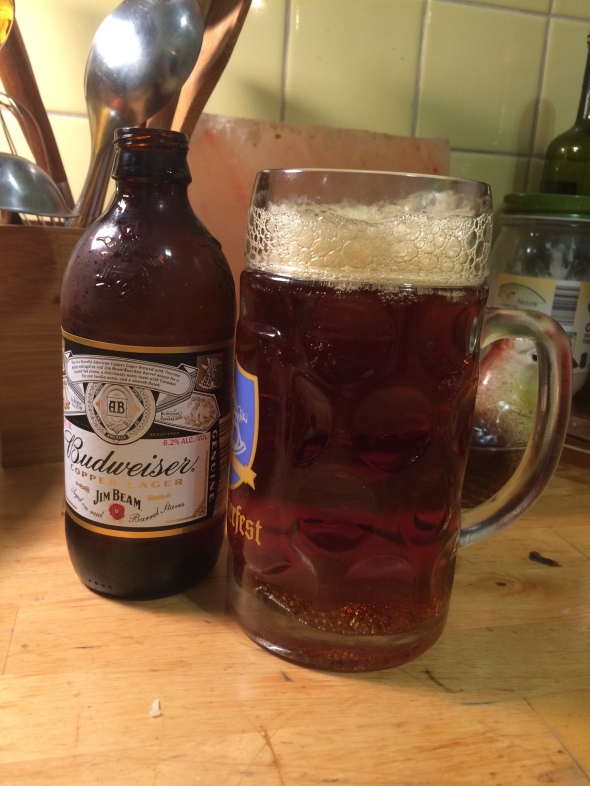 Beer of the week: Budweiser Copper Lager – Barrel aged beers are very hot right now.  Budweiser his trying to cash in on this popularity by offering this lager, “aged on real Jim Beam barrel staves.” The best thing about it is it’s lovely red-brown color. The head, of rather large bubbles, dissipates very quickly. The aroma is somewhat malty, and the beer actually starts off with some warm bready malt flavor. But the beer does not finish especially well. I fancy that I get hints of whiskey, and a bit of smokiness in the end, but that might be the power of suggestion. Either way, it is a middle-of-the-road beer for a bottom-of-the-road (how’s that for a figure of speech?) price.

Reading of the week: Transcendental Wild Oats by Louisa May Alcott – This is an excerpt from a wonderful short story in which Alcott relates the history of Fruitlands, the utopian commune co-founded by her father. According to Alcott, her mother did all of the domestic work while the men of the group sat around the fire and built castles in the sky. The men regarded “being” as more important than “doing,” so nothing got done. Naturally, the whole project lasted barely half a year.

Question for the week: I have recently taken to memorizing poetry. What other relaxing pastime could one adopt that would be both enriching and relaxing?