Where have all the philosophers gone?

This is the thirty-fourth in a series on The Harvard Classics; the rest of the posts are available here. Volume XXXIV: French and English Philosophers

It has always seemed odd to me to refer to a living person as a philosopher. I am aware of a number of living people who may be considered philosophers, but I think of them variously as authors or professors. Or I consider them in the context of their specific fields: economists, psychologists, anthropologists, and the like.

Clearly, part of the distinction that I draw comes from the increasingly specialized nature of study. Aristotle and Bacon did not specialize; their interests and writings are wide-ranging. Even the relatively recent Darwin was more than a biologist; he was also a historian, geologist, and anthropologist. In short, he was a natural philosopher. Likewise, Maimonides was more than just a theologian and an astronomer, he was a physician at a time when the fields of endocrinology, dermatology, and oncology were still centuries from being particularized. Perhaps the lack of specialization and differentiation was key to his ability to think more universally, to be a philosopher.

That is not to put down specialists. As human knowledge becomes both broader and deeper, any given individual must focus more narrowly to make any new headway. But can a philosopher be a specialist? Isn’t universality at the heart of philosophy?

The word philosophy means “love of wisdom.” I think that it is clear that the wisdom in the word is quite distinct from knowledge. Specialization forces people to look at discrete and minute facts, perhaps prioritizing particular knowledge over universal truth.

The love part of philosophy also seems problematic today. The love of wisdom is a different sort of motivation than I perceive in most people. To pursue wisdom for its own sake is not the same sort of thing that I see in professional academics and authors. I assume that most people, even thinkers that I respect greatly have a profession rather than a passion. Perhaps I see living people as sociologists, legal theorists, or historians rather than philosophers because I can hardly conceive of them working out of a love for wisdom rather than financial and professional necessity. Even “popular philosophers” seem to be doing a job rather than philosophizing as I understand it.

J. J. Rousseau similarly questioned the motivations of purported philosophers: “But were the philosophers in a situation to discover the truth, which of them would be interested in so doing? Each knows very well that his system is no better founded that the systems of others; he defends it, nevertheless, because it is his own. There is not one of them, who, really knowing truth from falsehood, would not prefer the latter, if of his own invention, to the former, discovered by any one else. Where is the philosopher who would not readily deceive mankind, to increase his own reputation? Where is he who secretly proposes any other object than that of distinguishing himself from the rest of mankind? Provided he raises himself above the vulgar, and carries away the prize of fame from his competitors, what doth he require more? The most essential point is to think differently from the rest of the world. Among believers he is an atheist, and among atheists he affects to be a believer.”

Obviously, nobody who would prefer preeminence to truth is a philosopher under our provisional understanding of the word. And if Rousseau is right that all philosophers love their reputation more than they love wisdom, then there are no philosophers at all. I hope that he is wrong, but I wouldn’t even call myself a philosopher. And at least with me,  I have the advantage of knowing my own motivations. I think. 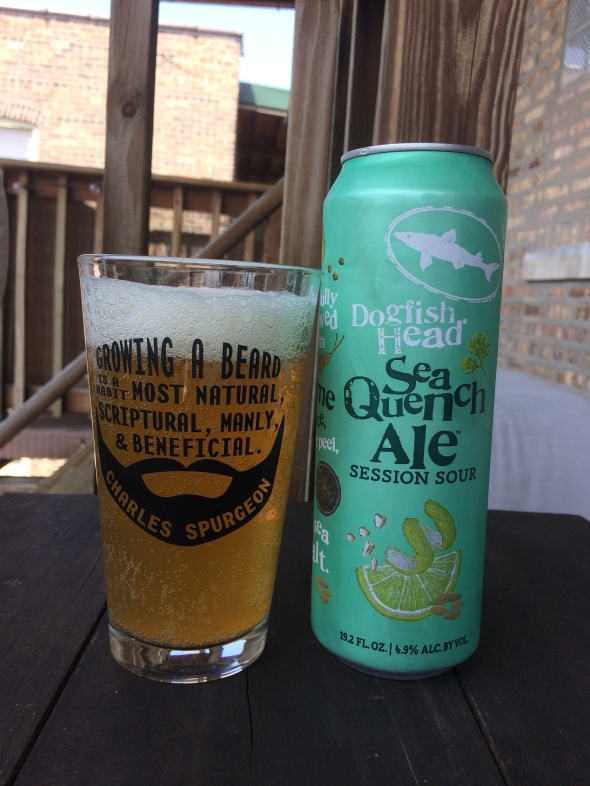 Beer of the week: Sea Quench Ale – This sour beer from Dogfish Head is like licking the rim of a margarita glass. It is yellow and cloudy with a slight green tinge. It smells of lime and the flavor has lots of citrus sourness and a bit of lime rind bitterness. It is really good, but so limey that it is unlike other beers, even other sours.

Reading of the week: Profession of Faith of a Savoyard Vicar by Jean Jacques Rousseau – Rousseau claimed that this section of his Emile was not necessarily an explication of his own philosophy, but simply an example of how to properly reason with a pupil. This excerpt starts near the beginning of the Vicar’s personal investigation, beginning with his Cartesian doubt of anything that he cannot reason from first principles.

Question for the week: Who is your favorite living philosopher?