← A Pointillist Theology
Measure Of All Things →

There are more forms of intoxication than alcohol induced drunkenness. And I am not referring to drugs. “Drunk with power” is more than fanciful speech. Euphoria after exercise is a kind of intoxication. Byron suggested music as an intoxicant. Baudelaire advocated poetry and even virtue for a reliable high. But these other sorts of intoxicants can be quite as dangerous as any drug.

Three coincident events led me to consider the dangers of such intoxicants. First, I started receiving Lapham’s Quarterly. Lapham’s is a literary magazine that includes a very wide range of excerpts and poems. I feel confident that more than a few readings on this blog will be inspired by Lapham’s. Second, Pope Francis is visiting the United States until Sunday evening. And finally, the recent Republican debates have spent a fair bit of time focused on how to “deal with” ISIS and Iran.

These may seem unrelated, but in one of the back issues of Lapham’s there was an excerpt from Charles Mackay’s Memoirs of Extraordinary Popular Delusions about Pope Urban II riling the people to war in the Holy Land. History repeats itself and, as Da Vinci said, “everything connects to everything else.”

Two particularly dangerous intoxicants are combined in Mackay’s story: personality cult and military adventurism. Some people are positively enraptured by the presence of a strong personality who has a way with words. And some people seek the thrill of conquest as incessantly as any junkie seeks his next fix. These two intoxicants are often combined with disastrous results. Among the greatest classical examples is the failed Sicilian Expedition by Athens during the Peloponnesian War. Alcibiades was a captivating figure and was able to stir the Athenians so thoroughly up that they neglected wiser advice and set about the course of events that would eventually see their own city fall into enemy hands.

Luckily, the current pontiff is not rallying the people to war. But his popularity, even among non-Catholics, is worthy of critical examination. Many people who see him on his American visit are genuinely ecstatic. And like all intoxication, intoxication with a personality can cloud one’s judgement.

More dangerous, probably, are the Republican presidential hopefuls (to say nothing of the equally dangerous Democratic hopefuls.) They aspire to have their own personality cults. Some of the candidates are already cult figures in some circles. And since the politics of the United States is war, there is little doubt that whoever wins will drum up military adventures that intoxicate the thrill seekers and zealots.

Some drugs are safer than others, and I wouldn’t take a sip of any drink that was mixed by somebody I don’t trust. 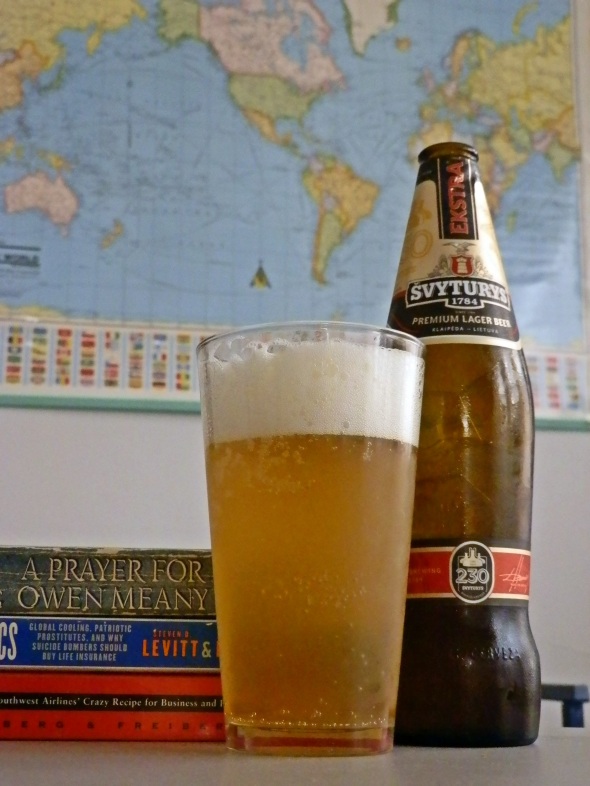 Beer of the week: Svyturys Ekstra – Lithuania has been a predominantly Catholic nation since the relatively successful Northern Crusades, when the Pope Celestine III declared holy war against the Baltic pagans. Catholicism was officially forbidden during the period of USSR control, but it has bounced back considerably. (Astute readers will have noticed that the map in this photo predates the dissolution of the Soviet Union, so Lithuania is not displayed as an independent nation.) Svyturys Ekstra is straw colored. There is not much aroma to speak of, except a little sweet grass and citrus. Malty sweetness dominates the flavor, with biscuit notes and a hint of tart bitterness at the end.

Reading of the week: Memoirs of Extraordinary Popular Delusions by Charles Mackay – “Urban the Second,” writes Mackay, “was one of the most eloquent men of the day.” The pope expertly rallied an eager crowd to war in a distant land. Promising salvation for fighting the infidels yielded an unexpected result (although in hind-sight a quite natural one.) Sure of their absolution, the crusaders engaged in all manner of vice and debauchery.

Question of the week: Moderate consumption of alcohol is not unhealthy, what about a moderate indulgence in getting intoxicated by personality?