← Beer Is All There Is
A Star is Burns →

Happy Friday the 13th! Today I will focus on one of the spookiest, creepiest poets of all time: Charles Baudelaire. His poems are dark as Guinness stout and chilling as… a simile about cold beers.

When I first read the works of Charles Baudelaire, I was none too impressed. Had he been an American teen in the early years of this millennium, Baudelaire would have been a goth kid with whiny LiveJournal. Everything is corpses and skulls with that guy. “Nobody likes me,” his poems lament, “but that is because my soul is a that of a beautiful poet and everybody else is a dick.” (By the way, I am only half making this stuff up. His poem The Albatross compares the poet to a majestic bird that is mocked when it condescends to land among normal men.)

But Baudelaire was more than just a whinging kid with macabre tastes. Perhaps his greatest contribution to literature was his translation of the works of Edgar Allan Poe. (Which sheds some additional light on his morbid sensibilities.) It seems that Poe was more or less forgotten in the United States in the generation after his death. Luckily, Baudelaire translated Poe into French and popularized his works. The so-called Decadent Movement spread across Europe, to England, and across the Atlantic, and it brought Poe back into vogue with it.

Of course, Baudelaire’s own work is not without value. I particularly like his poem Get Drunk. The ceaseless crushing gears of time are unbearable unless one gets drunk. “Get drunk! Stay Drunk! On wine, on poetry or on virtue, on whatever you want.” Find something that intoxicates you, something that alters your perception of time. And if you should wake up with a hang-over on the steps of a palace or in the grass of a ditch, ask the world what time it is. And the answer will be: time to get drunk! 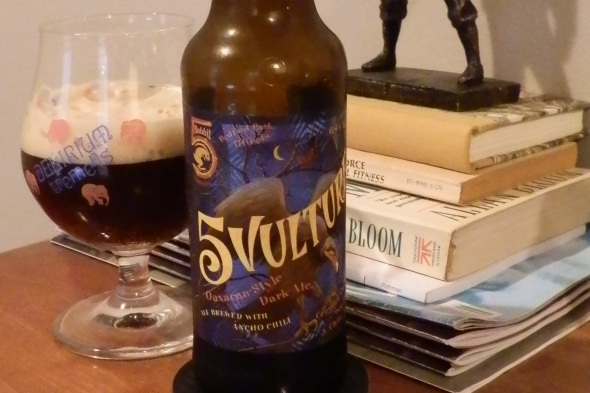 Beer of the week: 5 Vulture Oaxacan-Style Dark Ale – Find a photo of Baudelaire and tell me that he doesn’t look like a cartoon vulture. Which, given his dark style, seems totally appropriate. 5 Vulture Ale is brewed by 5 Rabbit Cervecería, a Latin American inspired brewery near Chicago. This dark ale is brewed with ancho chili peppers. The color is dark amber and the head is tan. The aroma is distinctive and sweet. The taste has hints of dark chocolate and a subtle fruit presence that I can’t quite pin down. The ancho chilies used in the brewing give a pleasant tingle at the end, though I’d actually prefer a bit more spice. It also feels thinner than one would expect from such a dark, flavorful beer. It is so different that I really don’t know what to think about it.

Reading of the week: Get Drunk by Charles Baudelaire – The first version of this poem that I read was an English translation that included the word “beer”. When I checked the French, I was disappointed (though not surprised) to find that the word used was “vin”. Beer would have been better, but wine will do.