I went to Catholic primary and secondary school. Being a non-Catholic and something of a free-thinker, I occasionally caused my Religion teachers grief.

One such occasion was the result of a multiple choice test question:

I answered D. none of the above. I’d always heard that Jesus came to save everybody.*  The answer that my teacher wanted was A. the poor. The Catholics have a doctrine called “the option for the poor”. My teacher knew the phrase, if not its origin or meaning. As a result, I was unable to get partial credit for my answer, even though I could explain why my answer was the right one. I could even explain how answer C was also correct. In the Book of Matthew, Jesus says specifically that he came for the Jews and refers to gentiles as dogs:

He answered, “I was sent only to the lost sheep of the house of Israel.” But she came and knelt before him, saying, “Lord, help me.” And he answered, “It is not right to take the children’s bread and throw it to the dogs.”

Another religion class run-in occurred when one of my teachers learned that there is a bush that produces volatile oils. In the summer, in hot climes, the oils sometimes ignite and burn away without damaging the bush. My teacher proudly proclaimed that this was surely the type of thing that happened in the story of Moses and the burning bush. This was proof that the Moses story is real!

I’ve seen this same thing done with the crossing of the Red Sea and the Seven Plagues. Some people take these explanations as proof that the Biblical accounts are real. But explaining the miracles does not make the story more believable, it only makes the story less meaningful.

Beer of the Week: Long Trail Belgian White – Although there is technically a few weeks of summer left, this sure feels like the end. There are still summer beers to be had though. Light, refreshing wheat beers are a popular summer choice. This unfiltered wheat beer is much like most other wheat beers I’ve reviewed: cloudy, sweet, citrusy. But there is something about the flavor that I can’t quite put my finger on. I think that the coriander that Long Trail uses imparts an earthy finish that I does not work for me.  Overall, I don’t think I like this beer very much.

Reading of the week: Thomas Jefferson to Dr. Joseph Priestley – This letter, from the author of the Declaration of Independence to the man who discovered oxygen is, predictably, very interesting. The topic, however, is not politics or science; it is religion. In the letter, Jefferson outlines a project to compare the moral teachings of Jesus to those of ancient philosophers. In so doing, he would leave out any miracles or divinity and view Jesus as a philosopher rather than a messiah.

*One Lutheran pastor I knew held a particularly interesting (and thoroughly heterodox) belief: Jesus died for the forgiveness of all sins, even those not confessed or repented. The logical conclusion is that all people are saved. And, what’s more, salvation cannot be lost or avoided. There is nobody in hell because God has forgiven all sin, even the most vile or obstinate.

Tomorrow, I fly to Iceland. From Iceland, I fly to Norway. From Norway, I sail for Denmark. After that, I make my way overland for the Czech Republic. I will be, in the words of Moses, “a stranger in a strange land.” What adventures lie ahead, I do not know. But I am sure of lovely company and good beer. What more can one ask for?

Well, one thing that could be asked for is security in one’s person and possessions. I suspect that I will be fairly safe. The countries that I will be visiting have significantly more homogeneous populations than the United States, and it has long been known that homogeneous populations tend to have lower crime rates than more mixed populations. But why should this be? In the past, I lived as an ethnic minority within a highly homogeneous society, but that didn’t turn me into a criminal or into a victim. I certainly felt that I benefited from the low crime rates, but if the crime rates were low because of the homogeneity, one would expect my very presence to affect the crime rates. I don’t see how that could be.

In his poem The Stranger, Rudyard Kipling suggests that the problem with mixed societies is that there is no understanding across the races. The narrator prefers “The men of [his] own stock, Bitter bad they may be.” Even a bad countryman is better than a stranger because one thinks like and understands his fellows. They may cheat and tell lies, but they are the same lies. But a stranger can’t be read; can’t be understood; can’t be trusted. Presumably, he can’t be sympathized with either. As a result, it doesn’t feel as bad to wrong him.

Beer of the week: Stranger American Pale Ale – Colorado’s Left Hand Brewing Company has a great reputation. Stranger APA is a good example of why. It pours with a nice fluffy head and has hints of apricot in the smell and taste. The beer is quite smooth and the good malt body is backed up with a bit of citrusy hops. The bottle says to expect “spicy rye”, but I don’t think I noticed any rye in the flavor. Not that that is not a problem; I think the beer is very good anyway.

Reading of the week: The Stranger by Rudyard Kipling – A comprehensive study of Kipling on race could be very interesting. The narrator of Gunga Din acknowledged that the “black-faced” Din was a better man than he. The narrator of The Stranger, however, would not associate with Din no matter how good a man he was: “Let the corn be all one sheaf— And the grapes be all one vine, Ere our children’s teeth are set on edge — By bitter bread and wine.”

Question of the week: Kipling’s stranger is not of the narrator’s “stock”. Does that mean from the same family? The same neighborhood? Town? Country? Continent? As an Englishman, Kipling himself was probably descended from Angles, Saxons, and Normans, all of whom were strangers in that land at one time.

So long as men can breathe, or eyes can see,
So long lives this, and this gives life to thee.

Every day since I heard about the death of Robin Williams, I have typed in the same internet search terms: “TCM Remembers Robin Williams”. I am disappointed every time to find that the video I am looking for has not been posted. (And don’t think that I am not giving TCM enough time to put a video together; the videos for James Garner and Lauren Bacall were each released only two days after their respective deaths.)

If you are not familiar with the video series by Turner Classic Movies “TCM Remembers”, you should probably check it out. Every year, TCM makes a montage of the actors, actresses, directors and so forth who have passed away in that year. Particularly big stars get their own individual videos. I am a little worried that TCM does not consider Robin Williams’ work to be adequately “classic” to merit a personal video. (Heath Ledger and Corey Haim were both included in the respective annual videos for the years that they died, but neither got an individual tribute.) Still, I hope that they make one for Robin.

While waiting for the Williams tribute to be released, I have watched many earlier TCM Remembers videos. One that particularly stood out to me was the video for Shirley Temple. Shirley’s video is so striking because her most famous work was done at such a young age. In the montage of her work, she is mostly a child and never passes her early twenties. This makes quite a stark contrast with the video for Mickey Rooney.  Like Shirley, Mickey’s peak popularity was as a child star. However, Mickey never left show business, so his video includes scenes of him as an old man.

Although Shirley’s life on film ended just barely after she reached drinking age, the real-world Shirley Temple Black lived to be 85 years old. Over three quarters of her life was after she retired from making movies. Shirley failed to get elected to Congress, but served as ambassador to Czechoslovakia and to Ghana and held a few other appointed positions. But she will live on now only in her films. No matter how long she lived after the cameras stopped rolling, or what she went on to do with her life, she will always be the cute child singing “The Good Ship Lollypop”. For as long as people watch her films, Shirley Temple will be a precocious little girl. Like the object of Shakespeare’s Sonet 18 her “eternal summer shall not fade.” 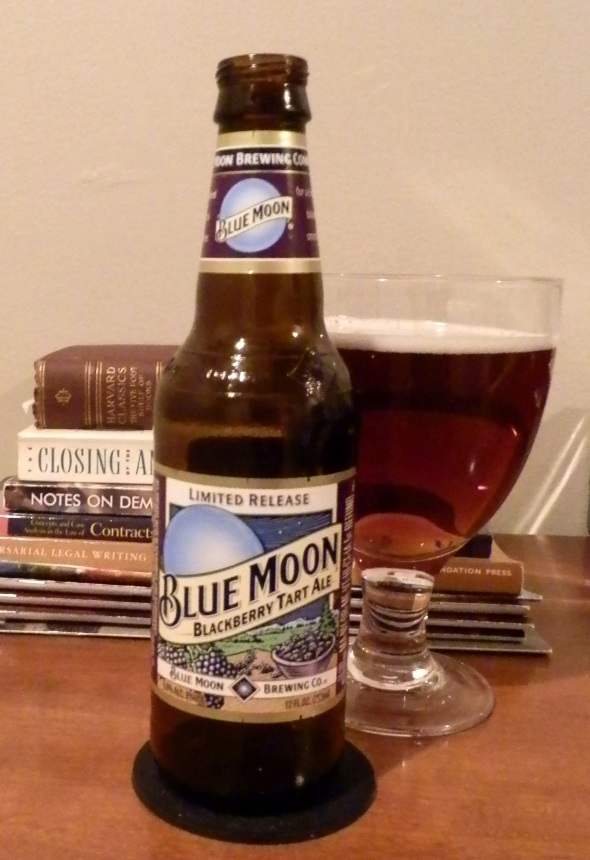 Beer of the week: Blue Moon Blackberry Tart Ale – Although I would like for the “eternal summer” of beer to never fade, many brewers have already released their autumn seasonal beers. I am in no rush to end this summer, though, so I am sticking with summer beers for a while. This particular summer ale is a very pretty beer. The head fades quickly, but while it is there, this beautiful reddish beer is quite a sight. There is certainly some tart berry aroma, as well as a hit of vanilla. The rich malt flavor leads, but the berry really shows up in the aftertaste. I almost wish there were more hops to speak of, but I am not sure how the bitter hops would work with the tart blackberry. Overall, I rather like this beer and impressed at the restraint it takes not to go overboard with the sweetness (as so many fruit beers do.)

Reading of the week: Sonnet #18 by William Shakespeare – This poem preserves the beauty of its object particularly well, if only because of who wrote it. So long as there are people to read it, Shakespeare’s work will be read. Could Shakespeare have had any idea how popular his works would be hundreds of years on?

Question for the week: Have you done anything that will last after you are dead and gone? Will your summer fade?