← Philosophers in the Rain
Nobody wears his watch in a pocket these days. →

The Silence of Historians

One important rule of history that ought to be remembered is that it is written by the victors. In middle and high school, American students are taught that The Articles of Confederation were inadequate to provide for the governance of the young country. If the school is particularly good, the students read The Constitution and even some of The Federalist Papers. As far as I know, no students read The Articles of Confederation or The Antifederalist Papers. But why would they? The ideas and principles behind those works lost out.

It is also worth noting that The Antifederalist Papers were not a comprehensive project in the way that The Federalist Papers were. Hamilton, Madison, and Jay had a plan that resulted in an organized and cohesive collection of articles addressed to a single state. The Antifederalist Papers, on the other hand, were written independently by an unknown number of authors, addressed to the peoples of several states without any overarching plan. They don’t read as a single work because they were never meant to be grouped together.

Additionally, a large portion of the complaints about The Constitution were rectified by the Bill of Rights. That can make reading the Antifederalists a bit confusing for a modern reader. But it also puts a new spin on the question of what ideology won the day. Every complaint that was addressed by the Bill of Rights is really a victory for the Antifederalists. They recognized dangerous flaws in the new Constitution and made them known. As a result, Amendments were written to memorialize and protect inviolable personal rights.

Aside from concerns about personal liberties, the Antifederalists also worried that a central government would engage in dangerous expansionism, wage wars abroad, and eventually wage war at home to bring recalcitrant (or as they saw it, independent) states to heel. A critical glance at any work on American history should be enough to answer the question of whether these fears ever came to fruition. Although (because?) history is written by the victors, history is no more than “a disgusting and painful detail of the butcheries of conquerors, and the woeful calamities of the conquered”. When the people are happy, free, and at peace, there is very little to fill the annals; “the silence of historians is the surest record of the happiness of a people.” So why are American history books so thick? 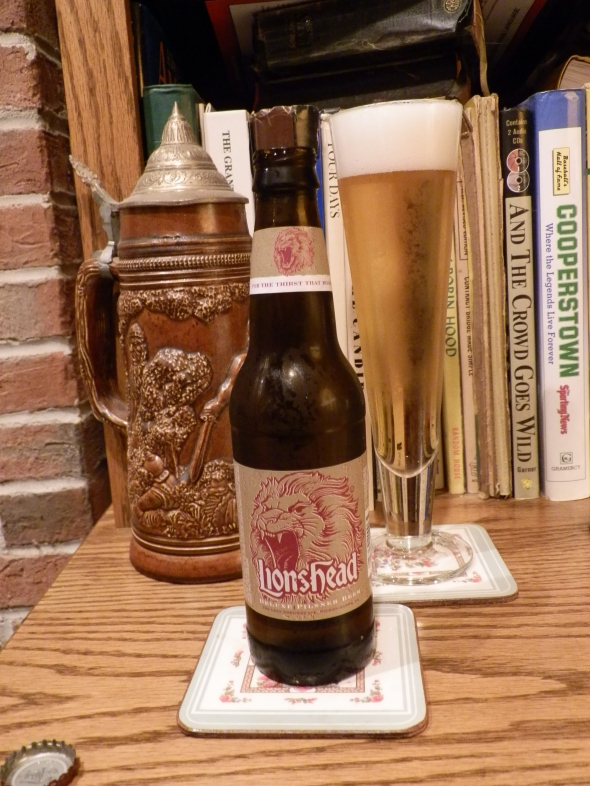 Beer of the Week: Lionshead Deluxe Pilsner – When I first had this beer, local college students told me that it is better known as “Lionshead-ache” because of the hangovers it causes. To be fair, they were in college and Lionshead is very cheap, so the hangovers may have been more related to quantity than quality. As far as taste goes, it is pretty much what one should expect for such a cheap adjunct lager: it tastes of slightly sour grain and naught else. But the bottle caps have pictogram puzzles printed on the inside, so I would certainly take a bottle of this over comparable beers. If you really want to try out the pictogram puzzles but can’t get Lionshead, puzzles can also be found on the bottle caps of Mickey’s and National Bohemian.

Reading for the Week: Antifederalist No. 3 – A number of essays opposed to the new government were compiled and numbered. Although they were not originally meant to be part of an overarching project, these individual writings have come to be known by their respective numbers in this compilation. Antifederalist No. 3 does not actually seem to be aimed at fighting the ratification of The Constitution. The author ruefully concedes that the people desire this new governmental scheme. The new national government will be accepted, not because it is the best possible system, but because the American people are simply and regrettably not up to the challenge of local self-rule: “Alas! I see nothing in my fellow-citizens, that will permit my still fostering the delusion, that they are now capable of sustaining the weight of SELF-GOVERNMENT: a burden to which Greek and Roman shoulders proved unequal.”

Question for the week: The author of Antifederalist No. 3 writes that “Where the people are free there can be no great contrast or distinction among honest citizens in or out of office.” What does it say about the United States that politicians are essentially celebrities?