As I mentioned last week, I am on drugs that are not to be mixed with alcohol. Luckily, however, I have a small back-log of beer reviews that I need only attach to a reading. So the blog goes on…

Speaking of medicine, one of my favorite literary scenes of all time is about patent medicine. In The Adventures of Tom Sawyer, Mark Twain lists the remedies that Aunt Polly inflicted upon our titular hero. Tom was depressed because the girl he liked was ill, so Aunt Polly applied all sorts of treatments to him to bring back a healthy disposition. When she settled on pain-killer (although Tom did not have any physical pain,) she certainly got a reaction, but not quite the reaction that she was looking for.

Rather than take the medicine himself, Tom took to “mending the health of a crack in the sitting-room floor with it.” Eventually, Peter the cat got a dose and his reaction was both hilarious and alarming. Aunt Polly was not amused, but learned a valuable lesson. Tom had given the cat a spoonful of the pain-killer with good intentions, just as Aunt Polly had done with him. But “what was cruelty to a cat might be cruelty to a boy, too.”

What we see from this story is that there are no real cure-alls and good intentions are not enough. There must be solid reasoning behind our actions if the results are to be positive. No matter how much we care, it is not caring that solves problems, it is reason. 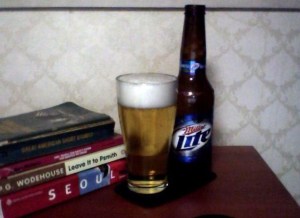 Beer of the Week: Miller Lite – For better or worse, “light beer” is every bit as American as Mark Twain. Miller Lite was originally known as “Gablinger’s Diet Beer.” Of course, a low-calorie beer is almost inevitably a low-flavor beer. Ironically, diet beer took off not because of the lower calories, but because it is easier to binge drink large quantities. In fact, the bottle doesn’t even advertise the calorie content, it only asserts that the beer is “less filling.” They leave it up to the customer to figure out that “less filling” means you can drink more. The beer itself is as clear as water and just a bit more yellow. If poured aggressively, it produces a decent but quickly fading white head that actually does leave a fair bit of lacing. The smell and taste are both extremely weak, but it sure goes down smooth. After about the 6th or 7th beer I finally understood what the appeal is.

Reading of the week: The Cat and the Pain-Killer from The Adventures of Tom Sawyer by Mark Twain – Not only is Aunt Polly a great example of the way that people can get caught up in fads and popular trends, the description of the cat’s reaction to being dosed with pain-killer is one of the funniest scenes ever written.

Question of the week: How often do you rely on medicines (or beer) to solve problems that are emotional in nature?

Since it is Good Friday, I have decided to forgo recommending a beer. Since today is the ultimate day of fasting for those Christians who do fast, it is best not to tempt them with a beer selection. Indeed, even if I knew that abstaining from alcohol on Good Friday was in no way beneficial or commanded, it could still be a mistake to entice others to break their fast. Just as St. Paul wrote in his first Letter to the Corinthians, you ought to “take heed lest by any means this liberty of yours become a stumblingblock to them that are weak.”

Also, I have been prescribed a bunch of drugs for a back injury. And if I can’t drink, nobody can drink!

Have a glorious Easter weekend!