A Dog and His Bone

Proof of the adage “people see what they want to see” can be found in a number of fields. Politics is likely the easiest place to observe the phenomenon. For example, people with diametrically opposed political opinions, when presented with the same information, tend to believe that the new information justifies their previously held beliefs. This is known as confirmation bias.

Even more interesting is the ability of people to find meaning in places where there is none. “Do you believe, upon your conscience, that Homer, whilst he was a-couching his Iliads and Odysses, had any thought upon those allegories, which Plutarch, Heraclides Ponticus, Eustathius, Cornutus squeezed out of him?” asks Rabelais. These men, who were no mean thinkers, “found” volumes worth of hidden ideas in Homer’s epic poems. Rabelais insists that the author does not think deeply upon what he writes, but with glass in hand he lightly dictates his stories.

However, just because the author does not consciously insert layers of secret meanings into his work does not mean that we are wrong to look for meaning therein. As it becomes a dog to meticulously extract every last bit of marrow from a bone, it “becomes you to be wise, to smell, feel and have in estimation these fair goodly books.” In fact, one ought to seek out meaning in all things, not because meaning has been hidden there for us to find, but because the search for meaning human nature, just as it is the nature of a dog to chew on bones. 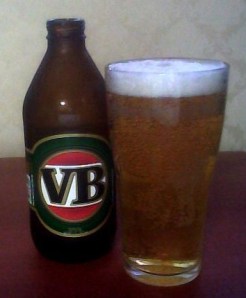 Beer of the Week: Victoria Bitter – The search for some deeper meaning often leads one into the bottom of a bottle. However,  this Australian macro does not have many answers. It has a faint, somewhat sweet and bready odor. VB is highly carbonated and tastes of malt and adjunct sweetness with hardly a hint of hops. It’s good enough to have a few while watching the rugby, but it’s nothing special.

Reading of the week: The Author’s Prologue to the First Book of Gargantua by François Rabelais, excerpt – The introduction that Rabelais gives to his book is somewhat perplexing. It is not surprising that he advises the reader not to judge a book by its cover; on the surface, Gargantua seems like little more than a giant collection of scatological humor and bodily diversions. Rabelais promises that under it all there is “a doctrine of a more profound and abstruse consideration, which will disclose unto you the most glorious sacraments and dreadful mysteries.” He then promptly announces that he did not let his writing get in the way of his gluttony and tippling, says that he has a “cheese-like brain” and makes a poop joke.

Question of the week: Rabelais seems sincere in his claim that there really is something valuable hidden under all of his toilet humor, so does he claim that Homer (whom Rabelais calls “paragon of all philologues”) never imagined the hidden meanings in his own work?